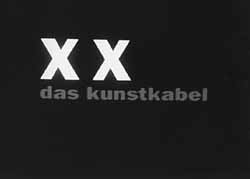 Before the turn of the millenium up to 10 000 television channels will be available to the viewer. The digital television fiction becomes reality. In the future XX kunstkabel will broadcast within this galaxy of media. The notations VIDEO ART or ART IN TELEVISION do not cover the concept of XX kunstkabel completely. XX is neither a cultural entertainment programme nor even an info channel, but a platform and site for production for innovative art in new tele aesthetics. XX is expansive. The cooperation with tv stations on an international scope is aspired.
concept: XX kunstkabel is an independant austrian art project, but is to be produced and transmitted throughout europe. Together with X of Arts/Cologne, XX kunstkabel is working according to a commonly elaborated structural concept. On the 22nd of January 1996 XX kunstkabel started broadcasting a monthly 20-45 minute tv programme on the local West Steiermark cable channel. In November 1995 X of Art.s created five days of art television on WDR during the “ART COLOGNE”. With the cooperation the attempt is made to place specifically regional issues and at the same time to maintain a common structural concept with corporate identity. Layout and concept are supposed to be defined according to the principle of the franchising model. Under these conditions a model of television will be established which enables easy access, in the way of a SELECTION LIBRARY, to transmitted material on the one hand, on the other hand programmes which relate to a specific region will be consciously exchanged and broadcasted in the corresponding region.”