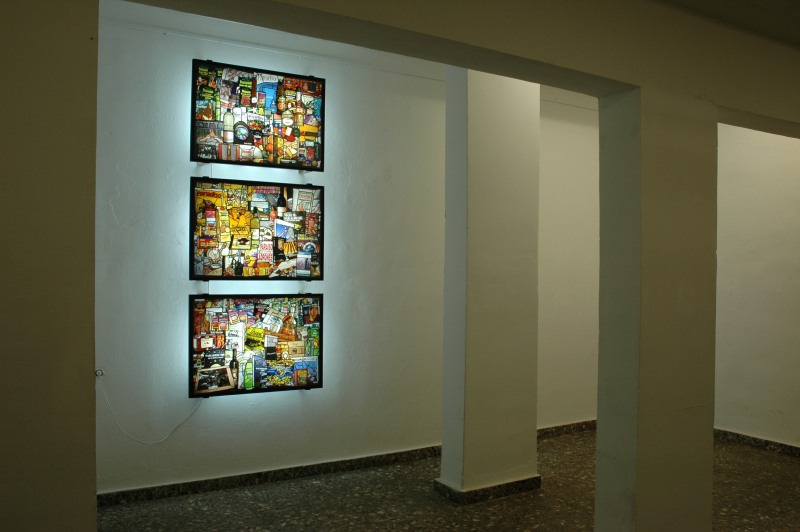 Paradise stands for a distant site of fulfilment and bliss, a site of exoticism and mysticism that can never be reached, and is thus an eternal ideal and on object of the longing for complete satisfaction. Paradise in religions is the otherworldly place of the soul at peace, where all our aspirations dissolve in the endlessness of fulfilled longings.
Miguel Rothschild’s Paradies [Paradise] (2004) consists of shampoo, orange juice, ice cream, sweets, book titles, and tourist destinations. In three photographic installations, the Argentine artist has assembled dozens of brand name items, magazine covers, and book covers all bearing the word “paradise” into an assemblage. On the surface, Rothschild here imitated the lead glass windows from the High Middle Ages with their allegories from the Christian visual tradition, in particular be found in Gothic cathedral buildings. Capitalism as religion?
What the artist represents playfully and with irony are on the one hand the messages of the consumer industry, which instead of just selling a shampoo style their products into genuine bringers of salvation, because they help to meet the right man (shampoo), provide health to our life’s end (orange juice) or unsuspected trancelike feelings of happiness (ice cream). Or we buy a ticket and fly to paradisiacal South Africa, New Zealand, or Bora Bora (and never really want to get back to real life). We don’t buy products, but promises, promises of salvation. Advertising and the consumer industry operate with our yearnings, the insatiable longing for happiness or satisfaction. But satisfaction simply will not kick in, the diffuse state of fulfilment remains: “The longing of humans is always directed to something that cannot be named. And that’s why we have to buy buy buy.”10
Against the “disenchantment of the world,” the brand-name “paradise” is used for the earthly kind of seduction, seduction for consumption. But this seduction does not culminate in salvation, but debt. Debt and guilt are linked emblematically in the worldly (consumer) paradise and religious paradise: in the Christian narrative of morality, Adam and Eve were driven from paradise because they were guilty, because they were not able to resist temptation. “Capitalism could not have replaced Christianity if it were not essentially Christian, religious in essence, as a cult religion and religion of guilt directed towards the replenishment of a lack. The Christian thing about capitalism and the capitalist thing about Christianity is the parasitic relationship to guilt.”