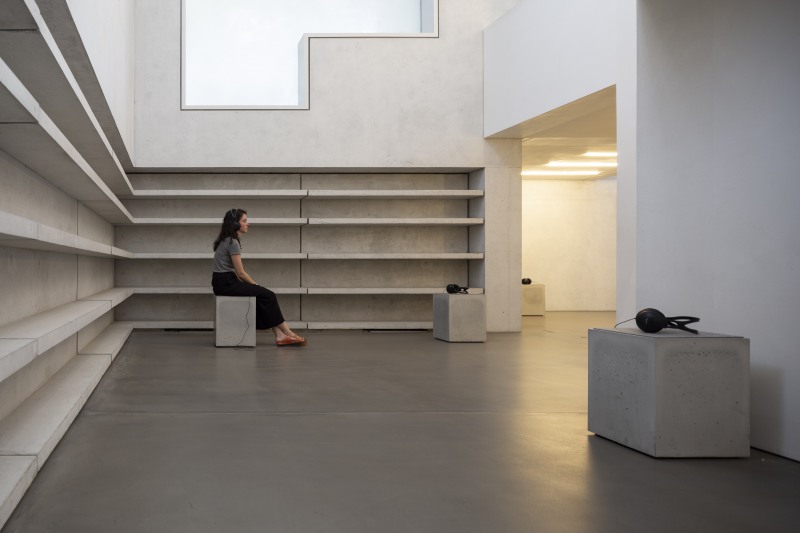 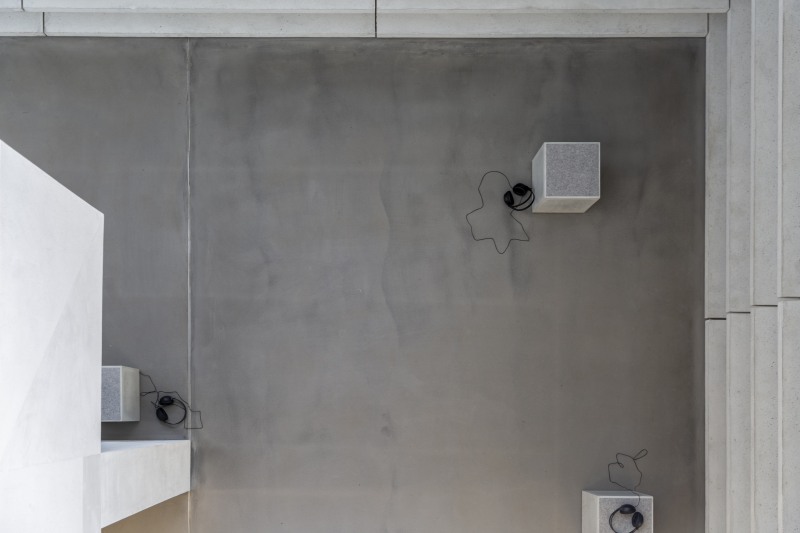 What sets Magdalena Rude’s work apart is all in its name: Ohne Titel, Auszug aus dem Verzeichnis der flächenbezogenen Nutzungsarten im Liegenschaftskataster und deren Begriffsbestimmungen (Nutzungsartenverzeichnis) der Arbeitsgemeinschaft der Vermessungsverwaltungen der Länder der Bundesrepublik Deutschland (AdV) von 1991 [Untitled, Excerpt from the Directory of Land-Based Usage Types in the Real Estate Cadastre and its Terminology (Usage Types Directory) of the Working Committee of the Surveying Authorities of the States of the Federal Republic of Germany from 1991]. The sound installation treats us to a list of various official land use designations and thereby sets a challenge for our powers of imagination. The act of listening becomes an abstract model of manageability: the inventory list and designated procedures, as set out by a government body with the remit for spatial relationships. Despite this, the unwieldy official definitions of German bureaucracy-speak manage to transcend themselves. Tension is created between officialese and poetics, between abstraction and imagination, concept and form.

KT: For the exhibition Modell und Ruine you are presenting the sound piece Ohne Titel, Auszug aus dem Verzeichnis … [Untitled, Excerpt from the Directory …] (2015). In this work different types of land use as officially defined for statistical surveys are recited. For example: “Gebäude und Freifläche – Gewerbe und Industrie: Tankstelle” [Building and adjacent open area – commercial and industrial: petrol station]. Or: “Gebäude und Freifläche – Mischnutzung mit Wohnen: Wohnen mit öffentlich” [Building and adjacent open area – mixed use including residential: residential with public].The acoustic archive appeals to listeners’ imaginations, as they call to mind both specific structures and abstract associations. In this sense you initiate what you call a sculptural process in listeners. Can you explain this process? How does it work?

MR: For me this imaginative process, set in motion as one actively hears the terms, has a constructive aspect to it: When we hear a term it almost automatically assumes a specific form, is to a certain degree “implemented” in our imagination. What’s created in our imaginations is based on our individual experiences. The different potential real estate property uses are related to the grounds, building, vegetation, bodies of water, etc. and thus to volume, form, spatiality, material properties, materiality and other sculptural characteristics.

The rapid sequence of terms automatically lends the imaginative process something fleeting and unfocused. When a series of similar terms is spoken an image can, for example, be set in motion, be transformed and retransformed (“Einzelhaus […] Doppelhaus […] Reihenhaus […] Gruppenhaus […] Hochhaus” [detached house […] semi-detached house […] terrace house […] group house […] high-rise]). Sometimes when I listen to this piece I have the feeling that I’m watching the landscape pass by from a moving train, as a result of the succession of terms.

KT: The work has a lyrical quality, not only because of the redundancies, ellipses and absurdities. (“Wohnen mit öffentlich” / “öffentlich mit Wohnen” is fantastic.) It can also be perceived in the context of traditions. It reminds me of a poem by Rilke that begins: “Ich fürchte mich so vor der Menschen Wort. / Sie sprechen alles so deutlich aus: / Und dieses heißt Hund und jenes heißt Haus, / und hier ist Beginn und das Ende dort.” [Humans’ words strike me with such dread. / They pronounce everything so clearly: / They call this dog, they call that house. /

And here is the beginning, and there is the end.] The poem expresses a scepticism towards language and criticism of our dysfunctional relation to the world, which we purge of everything wondrous.
I think the same can be said of Ohne Titel, Auszug aus dem Verzeichnis … What aesthetic and critical potential do you ascribe to the work?

MR: In this regard I find it fascinating what happens to the terms when they are extracted from the directory and translated from written to spoken language. The act of speaking a word always involves an interpretation. Even a sober recitation adds meaning through sound, emphasis and rhythm and can charge the terms with, for example, humour or drama.

Rilke describes the act of assigning names. The focus of my work is not so much this type of categorization as it is the reverse process: the supposed clarity of terminological categories intended to delineate is annulled in favour of a great variety of imaginary notions. I am interested in the ways categories fail us, which allows ever new indistinct notions to take shape in listeners’ minds.

The work did not initially come about from a predominantly critical attitude toward the content or the use of language. I always approach my (source) material with an observational, questioning and curious attitude. My initial focus is an aesthetic interest in the subject. Only as the work begins to emerge from the process are new aspects of the material exposed.

By hearing the terms we are able to question and criticize all their implications – boundaries and limitations, power and ownership dynamics.

KT: In Dessau the work has been turned into an installation. In the souterrain of Moholy-Nagy’s Meisterhaus people will sit on concrete cubes with headphones and generate visions of rooms and spaces that will mix with their impressions of the specific situation. The Meisterhaus is now both a hollow cavity and a resonance chamber in which one hears the echoes of Bauhaus ideals.

How will this context alter people’s perception of the work? Can it be taken as a commentary on Bauhaus and its consequences?

MR: The work was not created as a commentary on Bauhaus or the new Meisterhäuser. However, I very consciously chose this location.

The room fascinated me because of its high degree of abstraction in terms of both design and content. In their design the architects responsible for reconstructing the new Meisterhäuser addressed the idea of the haziness of memory: doors and windows were condensed into abstracted wall openings, details were left out. My work plays with haziness as well – the haziness of the imagination, not that of memory.

By establishing a connection between the stools on which the listeners sit and the room’s furnishings – the concrete shelves built into recesses in the walls – I try not to disrupt the location and instead to maintain its specific quality of hollow cavity and resonance chamber, as you describe it. I think that this is an excellent setting for the audio piece. Spending time there and listening to the piece visitors will maybe experience the architecture in a different way.

KT: Are you as an artist generally interested in the condition of latency, in which something present is not yet (fully) revealed and can suddenly be made visible through nuances of change?

MR: Yes. I try to view things independent of their primary use (interesting that we are speaking here about a registry of uses). In this way the unique properties of the material emerge in a way that a familiar, categorizing view wouldn’t initially allow for. Sometimes I intervene more, sometimes less. Maybe this is the view that Rilke describes in the poem that you cited: “Die Dinge singen hör ich so gern.” [I so love to hear things sing.]