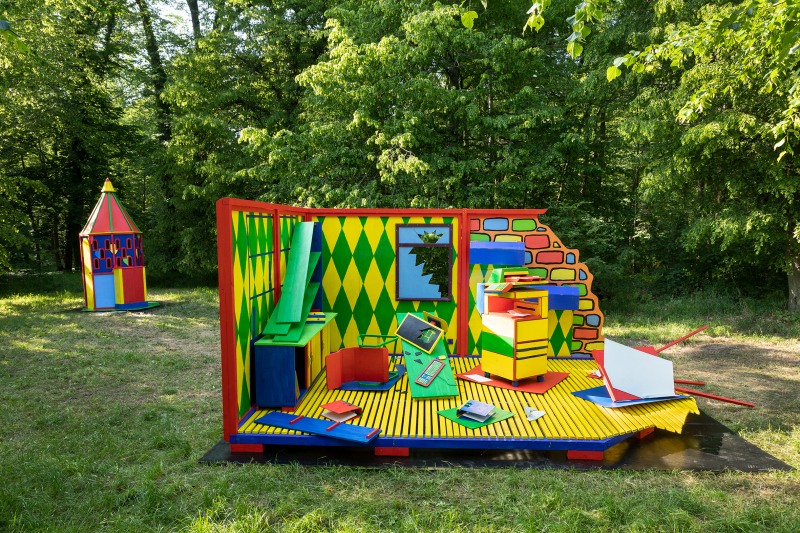 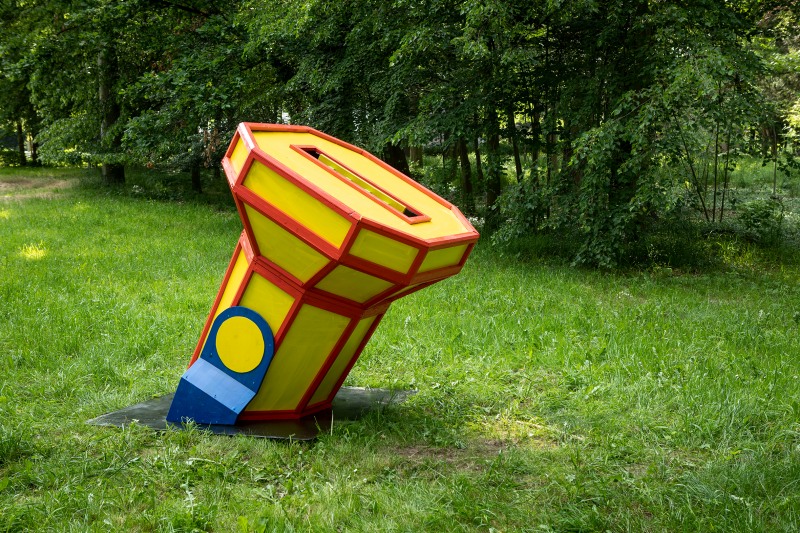 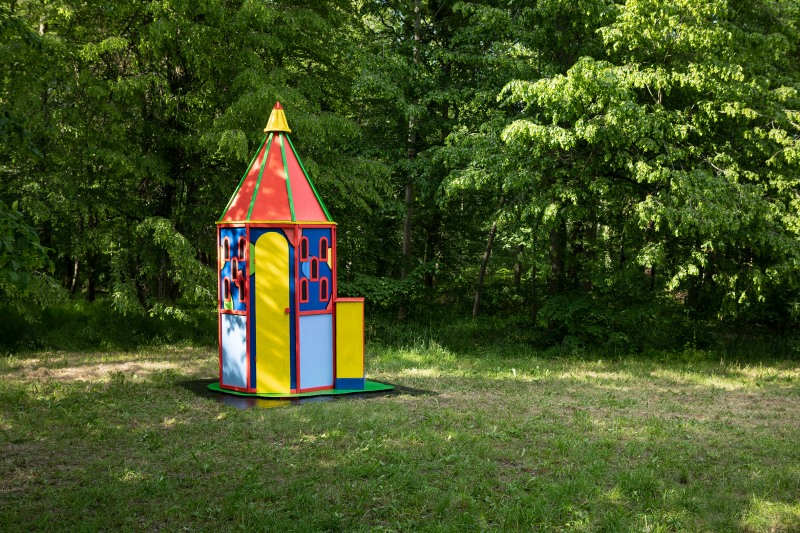 A pigeon loft, a catapult, a USB adapter in the shape of a capital and an office in ruins. These colourful pieces are placed around the park – unambiguous as references to both contemporary and historical cultural objects, yet ambiguous in terms of their function as works of art. Making use of humorous shifts in dimensions, wacky proportions and a limited palette of primary colours recalling Bauhaus, Cornelius Grau succeeds in weirdly alienating us from the objects he creates. Aspiring to transform historical allegorical representations and monuments into a concrete lucid rendering of theoretical reflections and philosophical arguments smacks here of surreal twist and ironic overstatement. Grau’s pieces are anachronistic props in the wrong film.

KT: In your wood, canvas and acrylic works you focus on everyday objects – bicycles, overhead projectors, fast food packaging. You give familiar objects a new image with extravagant colours. You shift things that we hold in our hands every day into an artistic context, placing them before our eyes as if we were seeing them for the first time. What fascinates you about trivial things, about our user-oriented world?

CG: The apparent simplicity. Everyday objects are just there, present in our everyday lives. People philosophize about favourite books or favourite films, but they probably hold a broom in their hands a lot more often. In terms of their content there’s not so much to be said about such everyday objects. Most things have a clear function and a specific look. We’ve gotten used to them and tend to perceive them in terms of categories: a fork is a fork and can be used to eat. That’s it! This clarity captivates me, this purity, which makes it possible to rediscover things and present them in new ways. But my thinking is often astonishingly formal as well. I have built replicas of tree stumps lying on the ground because I wanted to study vertical cylinders.

KT: Last year you curated the exhibition Zur Größe bestimmt! [Destined for Greatness] at the Künstlerhaus Dortmund. A title that finds an ironic balance between defiance and hubris. Do these qualities also describe your own work?

CG: Yes, of course. There’s often a certain irony. And defiance. Why does everything always have to be so important? So big? So meaningful? I question this a lot. But this also includes the admission that it sometimes just makes sense. The pictures in the exhibition had to, for example, be big in order to generate their intended effect. My exhibition titles are nevertheless often ironic, defiant or misleading. I once did a gallery exhibition called New Media. Someone who doesn’t know my work probably expected video works and not these colour sculptures of electric appliances. At a time when I was really annoyed by pretentious artistic rhetoric and cultural opportunism I commented on this with the exhibition title Alles Zirkus [Everything’s a Circus], a show in which circus accessories were relatively mundanely presented in a display window. I also utilize clichéd titles, like Neue Malerei [New Painting] for the first and only exhibition of mine to only include paintings. That was a little presumptuous of me.

To come back to your original question. Early on in my artistic career I strove to counter the arrogant tendencies of the art world with the banality of objects that I presented in a new way. Whereas for others this was meant to be symbolic of something and that was supposed to express a meaningful critical view of something else, a vacuum cleaner that I built was only intended to be a vacuum cleaner.

KT: … and a catapult a catapult. Your work Katapult [Catapult] from 2011 has a kind of Asterix-like bombshell effect. One can almost hear the WHAMs and BAMs and BOOMs when the imaginary bullets reduce the portentous trappings to rubble. That would have been perfect for the Georgengarten with its references to Rome. Now you are placing three sculptures that look like they came from a stage set in the field between the Castle and Sphinx Portal, in the middle of this highly symbolic scenery. How do you see the relationship between your work and art historical traditions?

CG: I grew up in the 1990s, so I was really raised postmodern. I draw on a lot of art traditions from the 20th century. For instance the formal clarity of De Stijl in terms of form and colour can be found in my works. My colour contrasts, my brushwork and, to be honest, my handcraft style tend more to follow the idiom of Expressionism. I find orientation, for example, in Minimalism’s focus on objects and the everyday iconography of Pop Art. Up until now I have been more traditional in my use of media. I make sculptures primarily from wood, paint on canvas and work with letterpress printing techniques. I’ve hardly done anything with photography or performance. I enjoy conquering other territories after they have in some form or another become established and developed their own clichés. In that sense I will probably always remain classic in terms of medium.

With the objects that I construct I attempt as far as possible to create archetypes. Combined with their everyday quality and the reduction to geometrical forms and plain colours, this often generates a nostalgic effect. In the projects for Model and Ruin time and tradition also play a role in terms of content. I am erecting, among other things, the replica of an old dovecote, which will be connected to a network hub. As a way of contrasting the traditional carrier pigeon, an old form of communication, with modern internet. A gigantic cigarette lighter-USB adapter will be seen sticking out of the ground like the capital of a column that’s fallen over, like an archeological artefact. Here the archaic meets the modern age. Next to this is an office ruin, though one isn’t sure if it’s a reference to an impending catastrophe or could be, like all ruins, a remnant from bygone days, but seen from a future perspective, a kind of premature nostalgia.

KT: Your objects look as if they might actually work. You have great design aspirations. In terms of colour you prefer blue, red and yellow. Reduction is a dominant principle – less is more. To what extent is the proximity to Bauhaus that I’m suggesting here a sensible way to approach your work?

CG: I myself draw on a similarly clear language of forms. My sculptures consist of clear lines and clear planes. So I do have design aspirations and consciously search for prototypical forms.

Bauhaus pursues a universal ideal of quasi expansive design as a total work of art. A house is completely fitted with furniture, art and household objects. Then entire residential districts or complex industrial facilities are designed. After that complete cities and even industrial nations could follow. The goal appears to be … the whole world.

I’m less revolutionary. I’m not following some kind of overall master plan above and beyond an exhibition project. For me it’s more like a sticker book that you slowly fill. Yet by means of my to date universally applicable style I am with each sculpture, with each everyday object and with each exhibition getting closer and closer to a total and complete new presentation of the world.