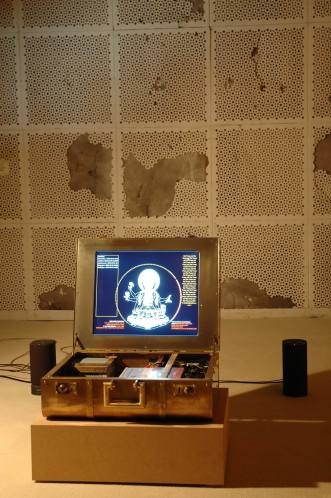 With their Internet project Non Chat Chat – Meditation for Avatars Hörner/Antlfinger want to give visitors of the exhibition as well as users in the World Wide Web the opportunity to meditate together in a virtual room. At issue is pure presence, not talkative chatting.
One source of inspiration for this project can be traced back to the guru Maharishi Mahesh Yogi, the founder of transcendental meditation, which for the artists is associated with unbelieving amazement and a certain fascination: “The really decisive thing for us is Maharishi Mahesh Yogi’s desire to prove his technique in the light of science. He tried to prove the positive effects of transcendental meditation on the community with elaborate field studies. When 7000 siddhas, e. g., trained meditators, meditated in one place together, it was supposed to have concrete effects on the crime rate, economic growth (lowering of unemployment and suicide rates, higher per-capita income and higher stock market indexes), and on personal happiness. These field studies are of course controversial, and at some point were not pursued anymore. At issue was in the end to prove the existence of the ‘Unifying Field’5, a field to which everybody has access, where he or she can develop energies that can affect others.”
According to Yoga theory, at the source of one’s own consciousness there is an area of complete silence and peace and simultaneous complete alertness. The clear experience of this goes hand in hand with the experience of utter happiness. The state of peaceful alertness is a fourth state of consciousness (together with the known states: alertness, sleep, dreaming), and in different cultures it is also called: transcendence, samadhi, nirvana, absolute being, metaphysical centre, God’s heavenly realm.
The artists connect the following questions with their work: Is meditation a practice that can be extended to an electronic data network? Is it also effective with proxies, avatars? And what experience does this result in for the real subject?
Once again Hörner/Antlfinger:
“We claim this also very much in the sense of Pascal, who recommends gaining faith back by acting as-if, because one has nothing to loose, on the contrary, one could gain everything.”

Through the World Wide Web, the artists want to create a forum for the happy believers of the Biennale and for those who want to become happy believers with the aid of art and the techniques of meditation. If the project succeeds, we might conclude, following the title of a film by the American filmmaker Les Blank 6: God respects us when we work – but he loves us when we are happy.
An offer that cannot be turned down!

5 The unifying field is a term from theoretical physics. Unified field theories aim at merging all matter and the energy fields of the universe into one formula, the ‘unifying field’. A unified field theory, also sometimes called world formula, is intended to explain the relationships between matter, electric energy, magnetic energy, and gravity.
6 The correct title of the documentary film about a special highpoint in the hippy and counter-cultural movements is: God Respects Us When We Work ? But He Loves Us When We Dance.