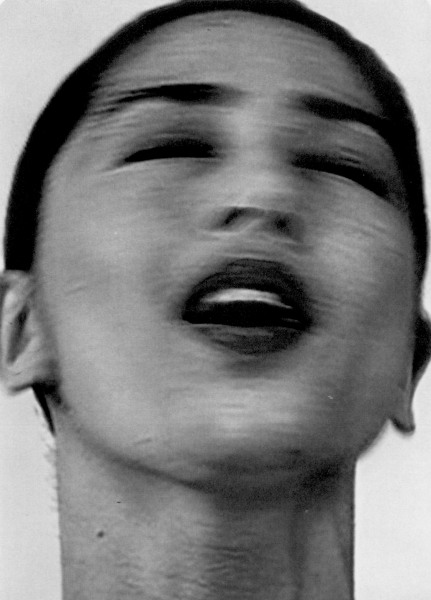 “MotionControl Modell 5” is a massive event, which at present lasts 45 minutes. It is the current production of the Viennese media art group Granular~Synthesis. Since 1992 they have been investigating aesthetic problems by focussing on the development of models of audiovisual resynthesis. Since its first appearance in May 1994 at the ICA London different configurations of MotionControl Modell 5 have been successfully presented. Their topics are aspects of perception of time, bodily awareness and disappearance of the body in an offensive and sensual live set up. The head of the Japanese performance artist Akemi Takeya, her emotions and sounds, are the focus. The scanned and sampled movements of that head are reorganised in four resynthesized sequences. They occur lined up in a wall of four screens and loudspeakers- as a voice mechanical choir. This choir of clones is accompanied by agressive synthesizer beats and mighty subsonic sounds. At the festival ARTEC 95 the Grand Prix was given to Granular~Synthesis with the following explanation: “The Grand Prix work MotionControl Modell 5, is a radical work containing intricate movements and emotions of pathetical human psychology inside mechanical repetition of body expression.”