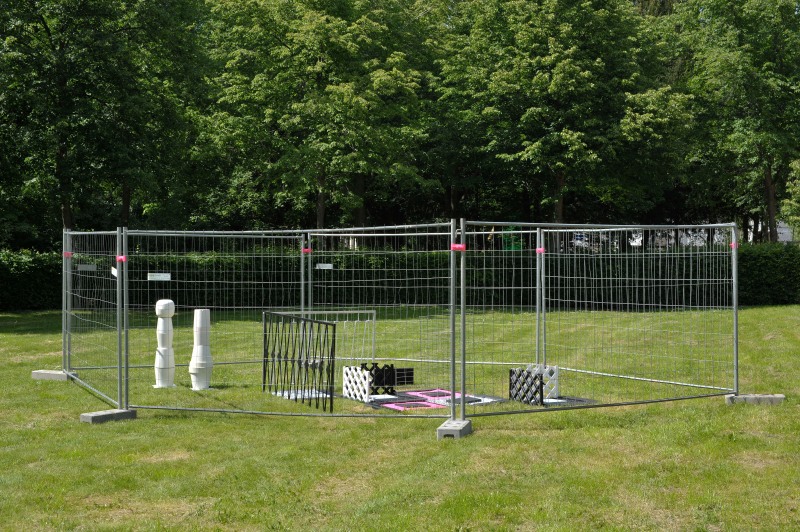 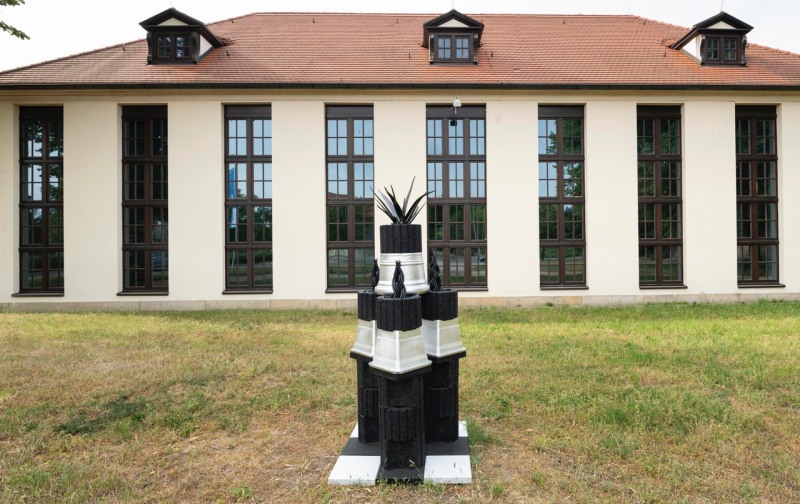 At selected pathway intersections around the orangery in the Dessau Georgengarten, Andrea Pichl has placed a number of wrought-iron pieces that evoke garden fencing. The artist incorporates references to modernist front gardens into the Classical park landscape through these installations and in her use of decorative pebbles. These temporary bordered features and strong surface design elements could have been taken straight from the Villa Arpel in Jacques Tati’s film Mon oncle. Like Tati’s 1958 masterpiece, the work Pichl has created for Model and Ruin questions the legacy of modernism in suburban gardens and the relationship between modernist aesthetics and its subversion through the tastes of its proponents.

DH: In some of your works you play with the floor plan areas of residential buildings from the post-war modernist period, converting them into space-filling sculptures. Other installations are reminiscent of architectural models for public housing projects or socialistic commuter towns. The aesthetic that you examine and I would say modify here probably originates from the forms, surfaces and colours that were omnipresent during our childhood and youth. To what extent are your works biographical?

AP: That’s a question that I’m often asked but that I can’t answer briefly or at all, as it requires me to establish a distance from my own personality.

My works most certainly have biographical origins, but not only in terms of their aesthetic. Here I would like to cite a few passages from the text by Alexander Cammann, features editor at DIE ZEIT, in my recently released catalogue, as he addresses precisely this biographical issue as it relates to my work and explains it from his own point of view much better than I could: “It’s a popular game to draw parallels between one’s own time and the world’s time, between private existence and historical background noise[…]. Anyone born in East Germany in 1964[…]can easily avoid having anything to do with Ha-Neu. This is even true of someone like Andrea Pichl, who spent her early childhood in Moscow before returning to East Germany in 1973 – the year Walter Ulbricht, the country’s head of state, died. At that time, Pichl lived next to the newly built Allende District in East Berlin[…]. The generation of intellectuals born directly after the construction of the Berlin Wall is situated particularly. The constellation into which they were born was a portent of their own fate.[…]for the younger generation there was only the agony of dictatorship, the gray torpor, the universal rule of lies, the rampant and brutal stupidity. For those born around 1964, the situation in East Germany was self-evidently rotten, failed, and futile – quite simply wrong.[…]Refusal and contempt had long been their internalized solutions; emotions boiled up within them to the point of rebellion.[…]To simply deduce a particular artistic consciousness from this social world would be a trivial kind of materialist interpretation; it would, in the most banal way possible, fail to grasp the inner logic of the artwork. But in Andrea Pichl’s work there are echoes of time and form. The form can be a reflection of a particular time, its utopias and its failures, a form filled with oddities, impossibilities, and pseudo-realities, stretched between vision and absurdity, an amalgam of past and present.”

DH: With his Fragebögen [Questionnaires] Max Frisch would like to impel us to want to discover whether we have a sense of humour when we’re alone. Since in our preliminary conversation about your work for Model and Ruin you referred to the wondrous front yard in Jacques Tati’s Film Mon Oncle, I would like to know how it is for you and whether you are for or against Learning from Las Vegas.(1)

AP: If with Learning from Las Vegas you are trying to find out whether in my work “the ordinary and folklore” and “anonymous commercial architecture”(2) as well as the often banal language of forms of mainstream culture are of interest to me as an important source then I can answer your question in the affirmative. The sources themselves and the values from the realms of mainstream culture are less important to me than the process of turning them into something new, as Venturi also writes. I’m interested in an overstatement and alienation of the perceived to the point of absurdity, so to speak. I’m also interested in the apparently fundamental human longing for collective security, for the enjoyment of comfort in an aesthetic sense. Comforts derived from things that are not essential.Things with their supposedly uniquely intelligible language, their relationship to each other.

Humour of course plays a central role in my approach. Jacques Tati’s “wondrous front yards” – as you so nicely describe them – are very well suited to answer your question and as a conceptual crutch they are indispensable for me in my installation for Model and Ruin. In his gardens with their geometric patterns made from coloured pebbles and glass with overly narrow, winding paths, stepping stones that are placed too far and sometimes too close together, absurdly defying the normal length of a person’s step, which I find so insanely funny, he describes the condition of an ostensible order in which there is a balance between an uneasiness with and fascination in modernity. Funny because in this completely rationalized and highly aesthetic garden humans cannot function. What fascinates me in Tati’s subtle arrangements are both the fine observational humour in regards to the behaviour of humans in their relationships to the things that surround them, and the objects themselves and how they relate to one another.

And to come back to Venturi again:it’s not the structures of modernity that are “functional”, but rather precisely the trivial and in some cases ugly forms of construction that were characteristic of most cities and that on a daily basis demonstrated their real, practical functionality.

DH: The grids bathed in sunset colours and the wrought ironwork-like carts are references to what I see as an agonizing aesthetic. In Die Welt als T-Shirt Beat Wyss writes: “But the ‘Volk’ has undermined the aesthetic regulations of modernity with the treachery of bad taste.”(3)

AP: Yes, that’s exactly what interests me in almost every work of mine: HOW the “Volk” has undermined the aesthetic regulations of modernity with the treachery of bad taste. Indeed, I set out with great pleasure in search of details of the mainstream language of forms found in the autonomously designed environment, details that I would subjectively assign to the category of “poor taste”, which originate from product aesthetics and consumption culture. I’m interested in the observation of the power and security that supposedly generate unity, a form of ostensible protection and belonging on which this system of rules and this vocabulary of forms appear to be based. But above all I’m interested in my observations of the “popular” language of forms and mainstream culture, utilizing the independently designed elements of residents’ living environment, which I in turn alienate, exaggerate and twist to appear even more completely dysfunctional and aesthetically absurd than they already are – to set these everyday objects in uncharacteristic, unrecognizable relationships to each other – to the point of complete and total illegibility.

I am also interested in intermediary spaces, which are often more important than the structures themselves. It can easily be deduced from these spaces how residents take possession of their surroundings and autonomously design them and how, finally, through design social behaviour can be induced. The free spaces become a stage on which the social and cultural history of the residents can be construed as well.

1 The publication Learning from Las Vegas by Robert Venturi, Denise Scott Brown and Steve Izenour from 1972 took an unbiased look at the world gambling capital and its architecture, which emerged from popular culture.