México Afuera (Mexico from the outside) 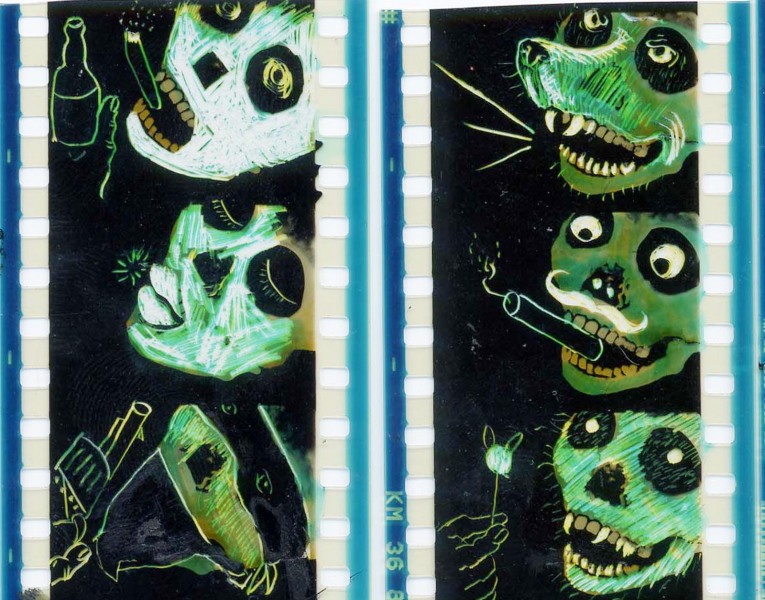 Mexico fascinates. The initial impression on visitors is dominated on the one side by its exuberance, joie de vivre and hospitality, the colours and aromas of its markets, the magical natural landscape and its surreal capital. On the other side the brutal legacy of the conquistadores seems to blaze a brutal trail of blood across the country’s collective memory. This trail threatens to drag on.

While the view from outside was conditioned by images of the conflict in Chiapas up to the turn of the millennium, it has been dominated since 2006 by the constant massacres and power struggles amongst the cartels, triggered by the so-called war against drugs.

The first cinematic view from outside is that of the Mexican migrants, a perspective by the way, that some EMARE MEX grant holders may have adopted during their stay. Victor Orozco completed his masters in 2012 with the documentary film maker Pepe Danquart at the University of Fine Arts of Hamburg with an animated documentary based on Orozco’s own study sojourn casting a pained look at his homeland via computer screen. A bleeding bull fleeing the arena with painted-on wings, the shooting of a member of the drug cartel Zeta and scattered corpses of victims of a narco-terrorist attack. The reality of 2.0 internet stream and YouTube videos from Mexico is heightened to a schizophrenic mix of emotion and distance. Orozco concludes: “In Mexico the sun still shines more beautifully, but that just means the corpses rot more quickly.”

We could write a potentially endless list of artists inspired by Mexico. The three following films and videos are current examples, placing in view various facets of Mexican culture.

Bjørn Melhus’ films oscillate between homage and denunciation of American pop culture, especially Hollywood. This versatility has propelled the Berlin-based video artist, protagonist of his own films, to the status of rising star in the art scene. The result of his residency, timed to coincide with the 200thanniversary of Mexican independence, is the film Hecho en México. The film references the increasing militarisation, violence and tension in Mexico today. With uniforms and toys from military and paramilitary units bought in the historical centre of Mexico City, Melhus plays a heavily armed warrior riding horseback through a Mexican forest accompanied by dramatic music. The first scene, which could have come straight out of Rambo 5, instead of concluding in the usual ejaculatory machine gun noise flows into a five minute loop, the typical video installation format. Just as Mexico seems to be trapped in a continuing cycle of violence, the poses and gestures of the warrior repeat endlessly as he gazes through his telescope

at the remains of the deserted city on the day of judgement.

Skull and skeleton motifs frequently recur in the work of the Dutch master of punk animation collage, Martha Colburn. She collages found footage, employs the puppet animation style stop-motion, paints on glass and scratches and perforates the 16mm film to create distortions reminiscent of pop art. She likes to collaborate with punk as well as jazz musicians. Secrets of Mexuality, a fast paced animation collage of pictures of luchadores (wrestlers) and kitsch paintings, is overlaid with music by the Mexican avant-garde composer Felipe Waller. Sex, violence and death appear as the pillars of Mexican culture, quoted, cut up, scratched and painted over in rapid sequences. As archetypes of machismo, the luchadores are alternately inscribed with gender attributes like breasts and erect penises, and, like in Reality 2.0, the bullfight occurs as a central element of Latin American masculine culture.

In Soy mi madre, the British video, photo and performance artist Phil Collins (not the singer, but just as famous in the scene) heightens

motifs from Mexican telenovelas into a humorous compound of all manner of relationship turns among a bourgeois Mexican family and their servants. The richly furnished chamber piece on 16mm film is full to bursting with melodramatic surprises and plot twists. Patricia Reyes Spíndola, Gina Morett, Verónica Langer and Zaide Silvia Gutiérrez, all well known faces from the daily telenovelas, play with aplomb every intrigue and scandal, stretching their native genre to breaking point. As Phil Collins says, this demonstrates “how gender and class identities are constructed in Mexican soaps, but also how replaceable the actors are in this genre”.