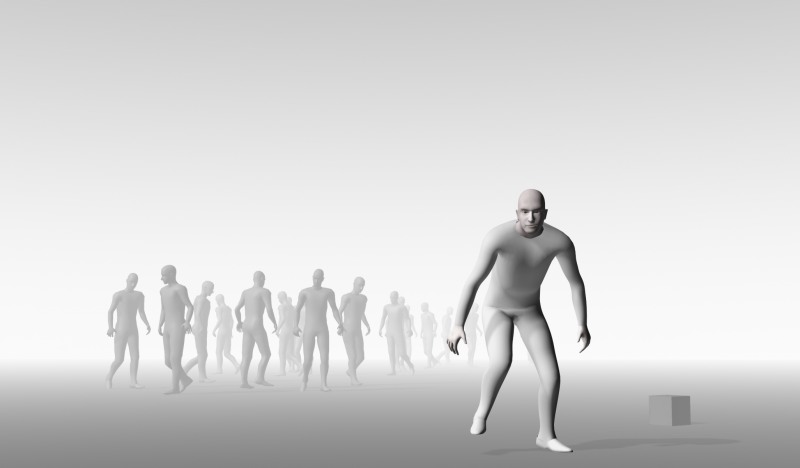 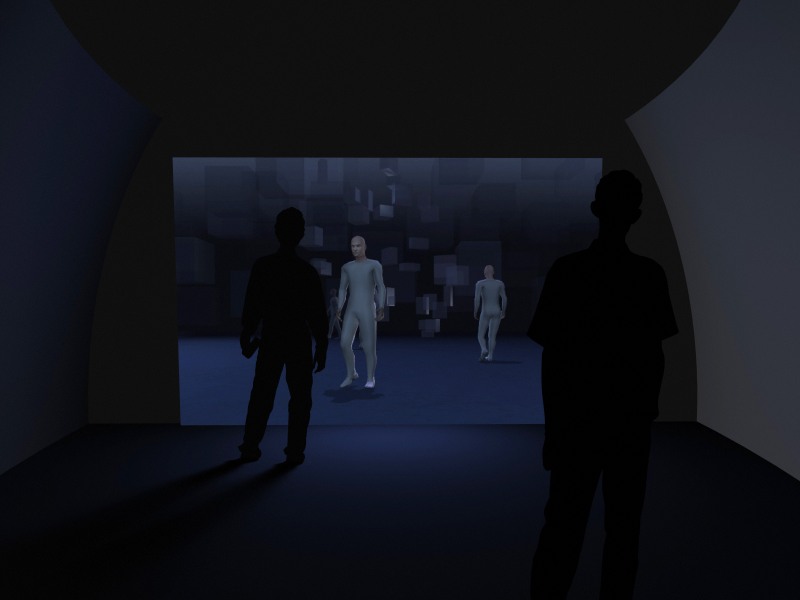 I visited the MASS website prior to talking to its makers. Here I found their description of the work, a first reference point that set the tone for my investigation. My very first glimpse of the MASS project documentation reminded me of a zoo. Why? First of all, the previous MASS set up – the audience gathered in front of a large screen – is remarkably suggestive of a zoo, where visitors assemble in front of a cage to get a reaction from or even to interact with caged animals. Avatars, the fictional characters that populate the virtual environment, in this case replace the animals. One becomes immediately aware that the artists chose to allow the avatars semi-autonomous behaviour. This observation is reflected mainly in the audience’s behaviour. The installation doesn’t come with an input device, so the visitor has to figure out other ways to ‘get in touch’ with the avatars. In order to do so, visitors are encouraged to revisit ancient, real-life interaction scenarios, such as the one remembered from childhood visits to the zoo. Secondly, this reminded me of the ‘who is looking at whom’ scenario, the twist and constant interplay between antagonist and protagonist. Bert Haanstra’s (NL) movie Ape and Super-Ape (1972) is a striking reference to this game of mirrors. For this movie, Haanstra worked with a behavioural scientist to visualize in a sometimes, hilarious way, the deeply philosophical issue of behavioural similarities and differences between humans and (wild) animals. As a concluding thought on this zoo association, I would like to mention the useless aspect of this installation: for, while we can draw lessons from it with regard to our own behaviour, the most interesting aspect of this work is its uselessness – in the sense of a non-functional activity such as going to the zoo – and its playfulness. This is an interesting response to the current trend towards applied or ‘useful’ art, especially now, in a period of economic recession, when usefulness seems to prevail as the key to evaluation.

The interaction and behaviour scenario of the MASS project evokes emotions and behavioural alternations rather than producing emotions per se; in other words, it’s the audience that ‘feels’ and interprets the avatars’ rather minimal, bestial behaviour. This picks up on ongoing debate about emotions in Artificial Life and Artificial Intelligence. As I understand it, this debate is grounded in a desire or belief that robots or avatars need to ‘have’ feelings and emotions although, up to now, they are able to show only limited emotion or react in some way to emotion in others: there is a long way to go before they will have their own emotions. Yet scientific research continues to pursue an impressive range of projects, developed in recent decades in the fields of art and technology, to deal with this issue. Such projects experiment with active involvement and with ‘make-believe’ or mirror scenarios designed to trigger the audience’s emotions. These art experiments had their first peak and glory days in the early 1990s. Here I’ll take you on a short journey back in time before returning to the MASS project. In an interview with Nick Baginski –posted by Josephine Bosma (when reflecting upon events at the V2_ Institute for the Instable Media) on the Nettime email list in 1997 – Baginski explains that he designed a group of disabled robots with clearly provocative intent:
‘They are not meant to be successful. They are meant to provoke some kind of emotional reaction like pity, or to make people feel sorry for them, etcetera; and it was very interesting to see how people responded to the very simple patterns of this physical being that tries to walk, but does not succeed. It tries really hard. People always try to help it. The machine doesn’t care if it’s not succeeding or if some human is giving it help. The human being actually gets something out of helping this thing. It is interesting to see these mechanisms. I put these robots on the streets and people give them money. They don’t give them money to help the robot – that doesn’t make any sense. They give them money because it makes them feel good.’

Another thing that confronts us with our conditioned behaviour and raises awareness of our mindset, especially when it comes to human – computer interaction, is the Terrain project (1993) by Ulrike Gabriel (D). Terrain is an interactive Artificial Life work that consists of a bordered, semi-circular arena (reminiscent of a miniature bumper-car arena), which is home to a group of small automotive robots. The robots are equipped with photocells and sensors that facilitate their freedom of movement and enable them to perceive the movement and position of others. A brainwave sensor placed on the head of a participant seated next to the arena measures his/her brain activity, which in turn controls the intensity of light. The more intense a participant’s brain activity, the less light strikes the robots and the more apathetic the colony’s behaviour; the weaker the brain impulses (i. e. the less attentive the viewer), the more chaotic the movements of the robot colony become. This contra intuitive or a-logical interaction scenario confuses the participant and encourages new alternative or improvised patterns of interaction.

These artistic approaches could be seen as counter to scientific research focused on the behaviour of an artefact. In the meantime, we live our digital lives, using reactive applied Artificial Intelligence and Artificial Life systems (as featured in user profiling systems and games) on a daily basis. While the MASS project builds on the previously mentioned art and technology tradition and hints especially at contemporary online environments such as Second Life, social-media and multiplayer adventure games, it distinguishes itself from these types of popular online applications by the absence of game elements and competition. Soto and Petill refer to the figures in their virtual world as avatars but these are not to be confused with the avatar that represents (the idealized) self. The MASS avatars have a muscular, genital-less, crispy, ‘fresh out the 3-D model box’ appearance, without facial expression, which is commonly referred to as a ‘neutral look’. The creatures move and behave in expressive ways. Each of them reflects one specific emotional state (based on one of the three built-in character types: violent, passive and irrational), and acts reactively, its responses triggered by the presence or movement of the audience. Infrared cameras detect information about the audience’s location, which in turn triggers specific avatars. We notice, for example, a shy avatar, whose movements and expression are reminiscent of a slightly scared animal, while others resemble something else, depending on their built-in character. The graphic cubes in the upper part of the virtual environment illustrate the progress of each avatar’s training in autonomy. These data-cubes thus represent the gradual evolution of the collective avatar population. In the MASS project, presence, attention and behaviour are key elements. The MASS project reverses the aforementioned zoo scenario, in that the audience here becomes a collective protagonist.