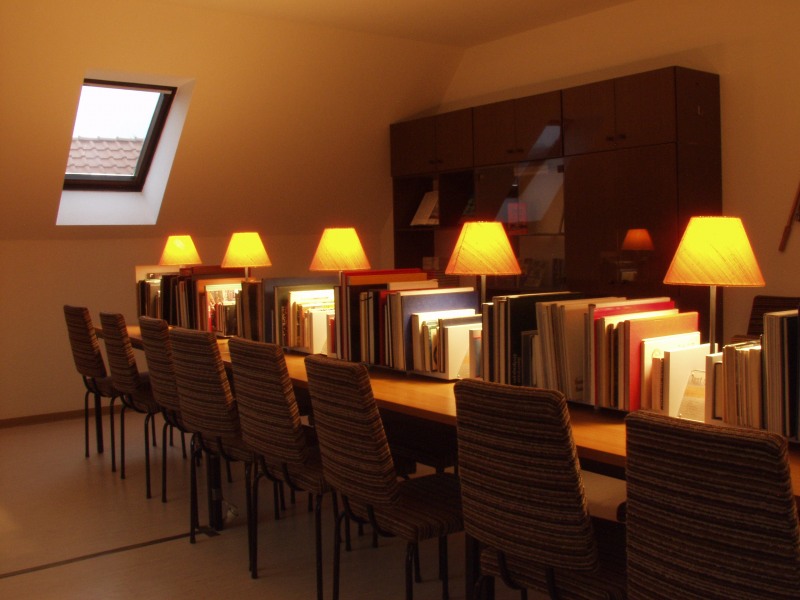 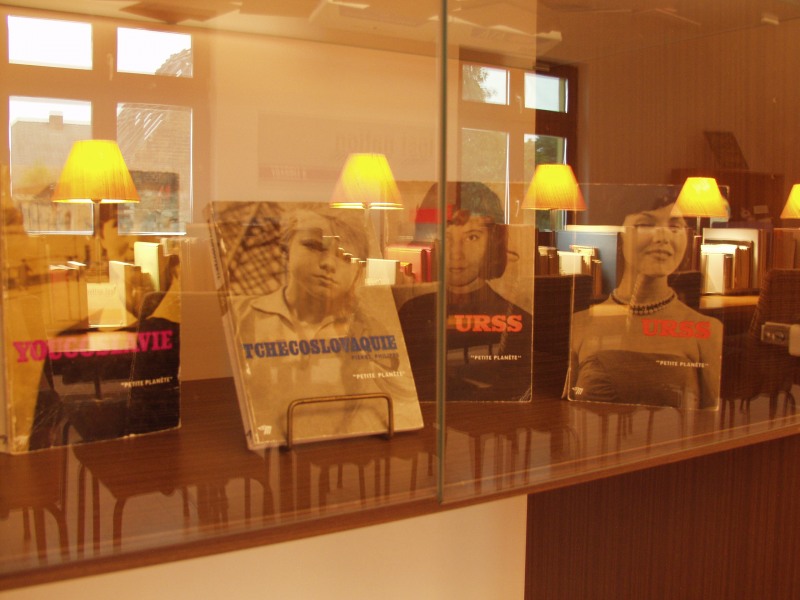 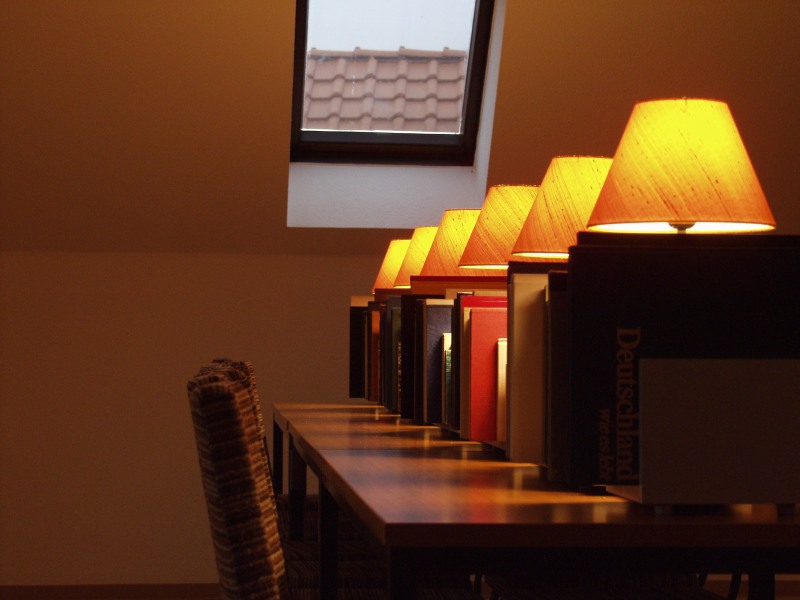 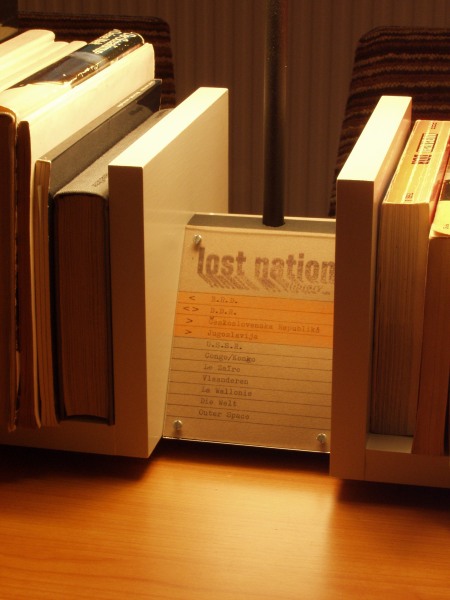 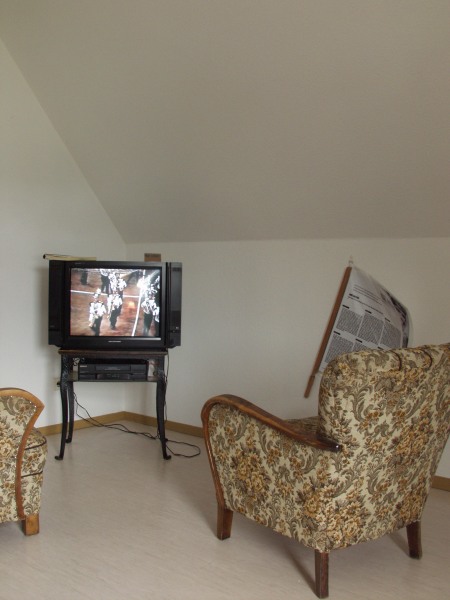 Trial constitution for a country that no longer exists

A place slash library slash installation about vanished nations: Yugoslavia, Czechoslovakia, East and West Germany, USSR, Zaire, etc. In a suitable setting, the visitor, after receiving his worldwide Lost Nation membership card, can go there to browse through or read books. He will search in vain for theoretical works providing information or analyses of countries of yesteryear. What he will find is an excellent range of original publications, in the true sense of the word. Authentic travel guides from the past, colourful photo books published either there or here, in foreign or familiar languages, will show the way to and around countries that no longer exist, glorify the splendour of monuments which have in the meantime been blown up, and praise the peaceful cohabitation of peoples who have by now barricaded themselves into their own young nations. “Lost Nation” means pack your bags and go.

The world. In the age of CNN, Internet and Mac Donald’s, in our “glocal village” (global + local, since even world citizens have their local roots), the citizen no longer knows for sure what is meant by “the nation”. The complications surrounding the recent closing of Renault and Levi’s actories in this country lead us to suspect that nations will inevitably be pushed aside, if not vanish altogether. The main characteristic of a nation state, sovereignty, seems for some time to have been pure fiction. It turns out that those with economic power, not political, are in control. It appears that the most important decisions are made at board meetings of multinational companies, not by councils of ministers. The distinction between the two is possibly not as great as it at first appears. A council of ministers operates within the laws of the capitalist world economy just as much as a board of directors does. It is said there is no alternative. In the meantime there are serious doubts about the remedy that is sometimes proposed, that the nation will have to expand. After all, will the political Europe-to-be ever be able to have any control over the international free market economy?

The nation. “Lost Nation” is a metaphor for one of the apparent implications of globalisation. Nation states seem to have lost their grip on the capitalist world economy by which they are  so thoroughly permeated. It is no coincidence that  most of the victims of the last decade have been communist countries. This leads us to suspect that the disappearance of certain countries is only a side-effect of the collapse of a particular type of state system. “Lost Nation” may possibly be more than anything the name of a feeling that puts a sober analysis of the facts to one side. After all, nation states actually still have an important role to play today, no matter what some people claim. “Lost Nation” also offers a look back at countries that no longer exist, though for each of these vanished countries new nation states have appeared. “Lost Nation” as a trompe l’oeil: in fact more new countries have been born in the last ten years than have disappeared (just count the fragments of the collapsed Soviet Union). It is true though that nation states are no longer the only political actors in a globalising world economy. Cities and urban regions play an increasingly important part.

The city. The American political economist Saskia Sassen convincingly demonstrates how a limited number of cities (New York, London, Tokyo) meet the material conditions that make globali-
sation possible. International banks and multinational companies prefer to locate their head offices in the well-connected centres of major world cities, and even Brussels occasionally tries to grab a bit of the action, aided by its status as capital of Europe, though it’s true this is still rather precarious. The hard-working, well-paid managers of banks and companies are often attracted to the metropolitan lifestyle and often prefer to live in the centre of the city, rather than in Flemish or Walloon suburbia. Property agents sensitive to the market and trends buy up dilapidated buildings and renovate them to suit the tastes of this metropolitan elite. Others open a new restaurant in the city centre every two months, where the interior is just as important as the food on your plate. Since the new double-edged élan of the Saint-Géry district (gentrification and segregation) can be read as a local effect of globalisation on Brussels, it is only logical that “Lost Nation” should take place in a building in this neighbourhood with its ambiguous metamorphosis. One month before the official opening, the activity on the ground floor roused all the usual curiosity. Would this be yet another hip restaurant, or trendy bar? The “Lost Nation” alongside the “Mappa Mondo?”

A village. Suppose we let ourselves go for a minute. No more analysis, let us surrender to our feelings. Then we would say: countries have lost the struggle, the future belongs to the cities. Not the regions, dear friend, or should that be urban regions? But then we are faced with a paradox. Since both Flanders and Wallonia will still badly need Brussels, it would be good not to let Belgium go the way of the unfortunate Czechoslovakia. Brussels is more than ever Belgium’s future. Considering all this, things do not look so good for the villages. As globalisation increases the importance of the major world cities, there also emerges a periphery that’s in danger of losing contact with world events. Chance would have it that ‘Lost Nation’ is not only a possible metaphor for globalisation, but is also the name of the perfect example of things local: a small unsightly village, literally in the middle of nowhere – Lost Nation, Iowa. We went to visit, armed with a video camera, and were received by the mayor of this village of 467 inhabitants. Visitors will find the filmed report on Lost Nation at “Lost Nation”, after all no place/ library/installation today is complete without television.

The Universe. Space voyages appeal to the imagination. Is there anyone who does not dream of ignoring the laws of gravity so as to view the infinity of the universe, and, most of all, to have a global look at our world from a position that was until recently the sole preserve of one or several gods? This collective cultural aspiration has several names: NASA, (the Belgian astronaut) Dirk Frimout, Mir, Ariane... all immensely popular icons that give shape to both reality and fantasy, to both science and science fiction. Space travel provides a familiar vocabulary for the longing for a different, better world. Space is the final frontier, the place of which mortals can only dream. The exploration (colonisation?) of outer space is the story of a Utopia on the scale of planetary capitalism. Ufology goes one step further by actually constructing a people and a nation that is not ours: the alien nation. It cannot be coincidence that since the end of the Cold War and the fading of communism, the phantom of the Red Menace has been replaced by the invasion of flying saucers and extraterrestrials.