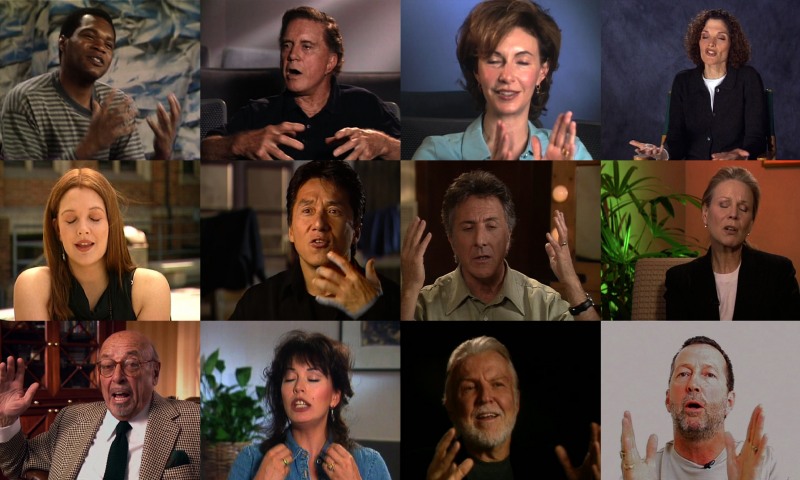 In Erik Bünger’s most recent video work Gospels (2006), created especially for the biennial, we are surprised by scenes of veritable glorification and adoration. We encounter men and women, individually in sequence, intoning a canon of adoration for an imaginary person. Their reports all attest to HIS generosity, HIS character, and HIS wisdom. Their total focus on and praise of HIM is presented without any illustrative context that would help the viewer to understand. Their reports trigger a many-voiced gospel song full of emotion and gratitude that lies at the basis of a common experience.
Those questioned are not unknown to us, but themselves people we honour, praise, and glorify: Hollywood actors like Meryl Streep, Dustin Hofman, or Drew Barrymore. We consider them as idols of a better life, their film characters stand for the successful mastering of problems and catastrophes in life, and in turn colour our image of the actors themselves. They are our models, heroes, and beauty queens. As a product of a glamour and glory industry, they are creations worthy of adoration: we would like to lick the words off their lips. But what they actually say is rarely the issue.
Our departing from our own ego in adoring the surfaces of the media world caused the Swedish artist Erik Bünger to sample a montage of object-less adoration from the countless ‘making of’ interviews that can be found as bonus material on DVDs of film releases. The personality cult around stars from music, film, and popular culture has become something everyday: media-staged figures of salvation in the modern world. The interweaving of sacred symbols into film and television entertainment and the appropriation of religious language represents the context of media practices of staging, placing the symbiosis of religious culture and the worldly work of conviction as well as the question of religiosity in a new light: What is religion? Who and what fulfils religious needs? How is life meaning communicated?
“Film has never stood in a sacred context,” Boris Groys writes. He founds his denial of the holiness of the film medium on the fact that its invention took place too late in the day; our culture, according to Groys, had already granted its potential for sacralisation to painting, sculpture, and architecture, to theatre and opera as forms of expression.3 But despite the obviously profane nature of commercial, media visual culture, film and television entertainment have indeed achieved quasi-religious functions:4 with their narratives about live, love, and death, they become models for the viewers to plan their own life and creation of meaning – and with them, their protagonists.