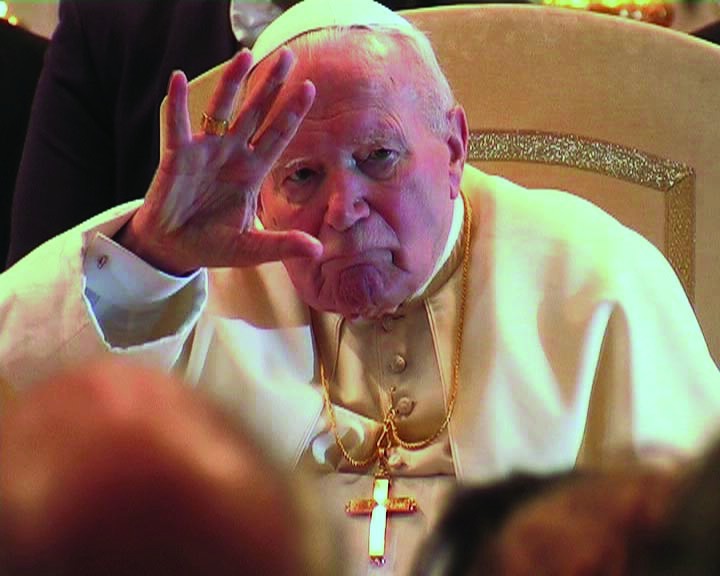 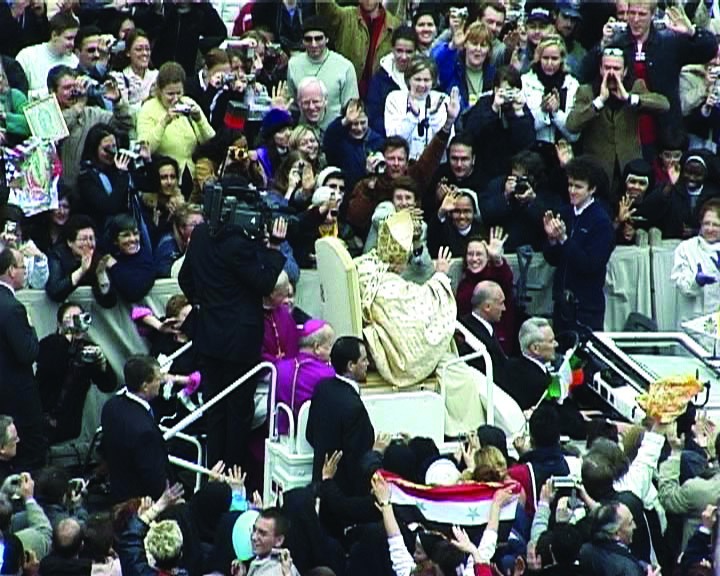 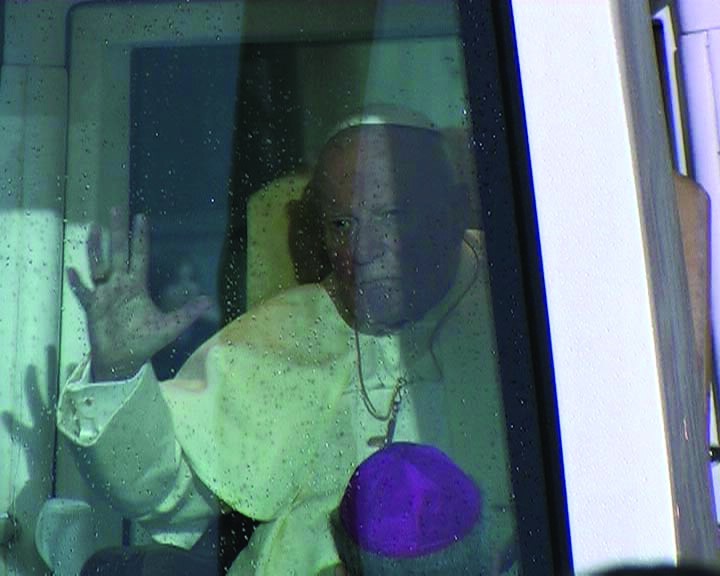 Pope John Paul II, who died last year, became known as the first media pope. He used the public stage of the media with so much savvy to communicate the message of the Catholic Church that he himself became an icon of the media world. His omnipresence in public produced a simultaneity of emphatic experience for all believers. In their most recent work, Für ein Leben nach dem Tod (For a Life after Death, 2006), the artist duo Korpys/Löffler accompanied the pope with a camera at all public appearances in Rome during the last year of his life. During their stay at Villa Massimo, they had themselves accredited as journalists in order to follow the official events of the Roman Catholic Church from the places reserved for reporters. Among CNN, BBC, and France2, the artists filmed the material for their seventy-five minute film.
The filmic work, formally speaking a documentary, is a complete composition of image, sound, dramaturgy, and editing, which because of (or despite) its repetitive rhythm develops a visual fascination all its own. Following the religious cultural performances, Andrée Korpys and Markus Löffler attended masses, audiences, and public blessings where not only the opulently outfitted choreographies around the head of the Catholic Church could be observed, where he figured as a martyr in the succession of Christ, but also the extras of the show: journalists, bodyguards, and police. Over and over, dark suits move into the image, outfitted with cameras and mobile phones, little cogs in the system of a media event controlled by the Vatican. All the participants – the cardinals adjusting the tablecloth, the media professionals breathlessly reporting on the events, or the stoic presence of the security personnel – are united in producing a never-ending Catholic visual medley that broadcasts the holiness of the Papal figure millions of times through television screens into the world’s houses and huts. The artists direct their focus on the media apparatus of missionisation and the representative structures of power and authority, practices of marketing and event creation. In doing so, the intimacy of suffering that is communicated as a horizon of experience is refracted in its supposed immediacy.
What remains is our knowledge of the end as a global media event:
“He [Johannes Paul II.] understood that not only do the media requires images, but the people … have emotional needs. The story provided by the media ultimately climaxes in the representation of the suffering and death of an approachable pope… At the death of the pope, the ‘currency of emotion’ revealed its buying power… the collective exchange of feelings before and behind the camera.”1 Even after his death, Karol Wojtyla remained a media star when in the virtual presence of millions around the world he was carried across St. Peter’s Square in papal robes. He opened the gates of the Vatican to the mass media, and they opened the gates to immortality for him: for a life after death.