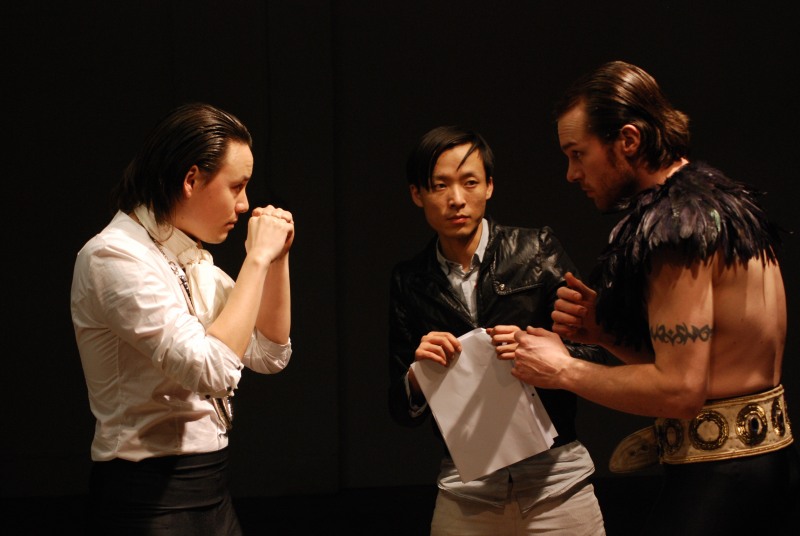 Ran Huang is an artist from China who recently completed the first EMARE 2009 residency at VIVID in Birmingham, central England. During the residency he made Fake Action Truth, a five and a half minute installed and looped video projection, shown between April and May. The piece was captured in high definition, brimming with intent through its conception, pre-production, casting and execution. Similarly, the post-production is well-resolved and controlled. Yet despite the control in the execution of the work, ambiguity and complexity are the strongest sensations when experiencing this piece.

Two men box in an abstract dark space, their movements leading to no contact, the punches don’t connect – part ‘no contact’ bare knuckle fight and part etiquette of fencing - this is more of a dance than a fight, their movements are stylised and codified. Character one wears old English garb, possibly the kind of thing ‘Gentlemen’ might have worn for boxing when it was apparently a gentlemanly thing to do in some imagined Victorian or Edwardian period. Character two is bare chested, he wears a hybrid collar and armbands of feathers with body markings more reminiscent of some indigenous or shamanic culture, perhaps Maori or from North China.

In preparation for Fake Action Truth, Ran researched and viewed many feature films with boxing references, though this is not directly evident in the film – no direct quotations and no visual clues. This is in line with what Ran says about his practice. Huang would maintain that his arts practice is not a ‘container’ for ideas or expression, however, with such strong visceral material it is hard not to start analysing, especially when Raging Bull is perhaps the most notable reference. Many similarities can be drawn between the works though Fake Action Truth is by no means a conventional narrative film, the central and recurrent themes in Raging Bull (as in much of the work of Scorsese) are relevant: passion, belief, repressed sexuality, love, social deprivation, competition, jealousy, cultural differences, brutal family relationships, and sexism are all embodied, codified.Fake Action Truth is a de-construction of representations of masculinity and a cool, stylised play on image and fashion in art, but more importantly, of power relationships. There is no overt frustration, the violence aestheticised not for representations sake, and it ends with a kiss. Although not overt or referenced by Huang, the work is a tease on his own sexuality, you have to wonder is he straight or gay or both. The porn soundtrack is notably one sided, we don’t hear the recipient of what are probably thrusts. The confusion and ambiguity in sexuality and male relationships suggest big questions about order, regimentation, ritualised violence, even about national relationships and history all through the cipher of the act of penetration.

In turn, the audience is engaged in a formal artwork within an art space, whilst the almost instinctive response to the sound of sex is Pavlovian and confusing. Alongside the new commission, an earlier work, Circus (2008), uses a trumpet PA (public address) speaker often referred to as a Tannoy. In the drawings by Huang we often see references to instruction, public address (command) Tannoy and conformity. The emblem of the Tannoy is a strong emblem for being ‘told what to do’ and familiar through many contemporary artists’ work across China, both as an instrument of the state and symbol of disobedience and protest. In the excellent work by Minouk Lim from South Korea, New Town Ghost, the Tannoy is used for broadcasting a ‘punk’ rant expressing disaffection with how the city of Seoul is being ‘re-generated’. In making this link with finding a voice, body and body corporate, I can further link and enjoy the artist’s reference and key relationship with Raging Bull. Although Huang sees himself primarily as an artist who happens to be from China, the contemporary influences of a London art school education comes with the coolness of a contemporary ‘western’ tradition. This does not fully disguise his exploration of cultural identity and frustration, which underlies deep dichotomies implicit within the relationships between East and West and between contemporary and traditional values. In its neutrality, Fake Action Truth is both antidote to Raging Bull and an attempt to re-frame hostile perceptions of hostile relationships, be they personal, or between nation states, or, clumsily, between West and East. I am glad this squaring up ultimately has a happy ending, and the surprise kiss.

Last year I invested in developing relationships with China through FACT (Foundation for Art and Creative Technology, Liverpool) by presenting a major contribution – the work of Anthony McCall and Al and Al in the Synthetic Times exhibition at NAMOC (National Art Museum of China, Beijing). FACT effectively represented Britain in the Cultural Olympiad programme, the world’s largest survey of media art. Not only have we observed massive change, we have also played our part in making it happen. In deciding whether to take part in Synthetic Times, I had to make a call on whether the perception of FACT in this context was going to be positive or negative, and on whether by taking part we were sanctioning a repressive regime. In retrospect I think it was the correct decision. Engagement and debate progress thinking, ‘squaring up’ further fixes perceptions and positions, thereby slowing down learning and understanding. I prefer the dance.

The filming took place in the factory space (previously a working garage) that forms the gallery of VIVID, and which was also the site for Ran’s residency, where he slept through the winter in a kind of mobile library-like, portable video-lab space. If Fake Action Truth has a dreamlike quality, I can imagine an intense dreamlike experience having led to its creation. The combination of time and dis-location so often make artists’ residencies rich opportunities to dwell on new areas of investigation, and find new ways of realising them. EMARE has hosted over 120 artists over a period of almost 15 years and the results of these residencies are another success. In the case of Ran, clearly the artist has had time to explore the locality, forming relationships with people living and working in the vicinity. Not only the excellent staff at VIVID played their role, but also a number of locals with a range of skills, from boxing to costume design, who were brokered and employed in the production of the film. The effects of Juneau Projects or the costumes of Marcus Coates would not seem strange in the context of Huang’s work; a shared interest in the (sham) shamanic and ancient natural world is present. It is the incidental and serendipitous meetings and observations that make the quality of a residency as clearly demonstrated here. The idea to use a particular kind of cloth and feathers sourced from local collaborators, this is the fruit of deeper engagement with people, working things through together and sharing ideas and time. During his residency, I feel Huang spent much of his time squaring up to himself and reflecting on being human and being a man.