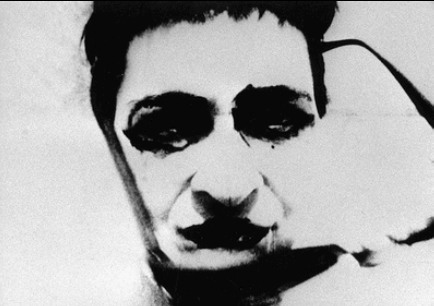 Almost all of her films deal with writing and language, and with Mattuschka, this means attacking the sign systems of language. This is often done cryptically, or is at least not necessarily as obvious as the manner in which Mattuschka is accustomed to involve the human body, i. e., her own body as the character Mimi Minus, whose sensuality marks the ultimate expression of antitheses to the abstract nature of language. Only a few shots in her films do not include her, and there, the images used often make reference to physicality itself. „Es hat mich sehr gefreut” (It was a Pleasure; 1987) consists of fourteen scenes. Against the background of an indistinct landscape, Mimi Minus, in close-up, spreads out a large towel, lies down, licks her fingers, spreads her legs, moves her hand to her pubic hair and begins to masturbate. In seven rapid sequences, the camera moves away. Mimi Minus shrinks to the size of a dot, then finally disappears in the harsh contrast of the film, while the cry of her orgasm echoes in the gates of an electronic sound device. In the final sequence, her head comes back into view; she looks exhausted, and her make-up is smudged. A voice says, off-screen: „Thank you. It was a pleasure.” These words are shown in a text insert, and the individual letters then trickle away.