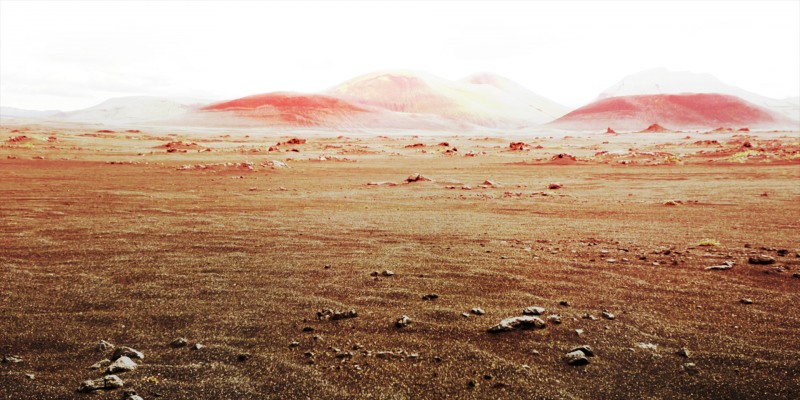 The Earth is an abandoned shipwreck in the infinite wastes of space. A lone human has been left behind and is witness to wondrous planetary transformations. Blooming out of toxic substances, new life forms arise from bio- and nano-technologies and half developed KI – a new Garden of Eden.

The events in this audio-visual performance inspired by J. G. Ballard are seen through the eyes of the protagonist, who submerges deeper and deeper into psychedelic landscapes visualised by Lucy Benson and Marcel Weber. They form a new world made of analogue and algorithmically manipulated film material. The accustomed contours of reality mutate, blur and dissolve.

The music is provided by Roly Porter and Keith Fullerton Whitman and pits the string section and modular synthesizer against one another. A new evolution is set in motion – the eternal agon between synergy and chaos.

Dream Cargoes was commissioned by Werkleitz and the Unsound Festival in Krakow.

Sandra Naumann: When we first started talking about a commission for Avoiding Utopias we quite quickly spoke about J. G. Ballard who is known for his dystopian (science) fiction. His short story Dream Cargoes is about a young sailor navigating a rusting ship loaded with poisonous chemicals to a deserted island and then encounters nature exploding and new life forms developing out of the toxic waste. How did you initially come across Ballard and this story? And what interested you about it?

Marcel Weber: We both had our own initial starting points for the concept, I was particularly interested in the future evolutions of the various biotechnologies and hybrids mankind is developing – think of nanobots, synthetic materials, autonomous satellites and AI – which will become our legacy.

Lucy Benson: I had been thinking a lot about what it means when we take the stars, this source of human reflection and aspiration, our dream source and exploit it for material gain. What impact that really might have on us culturally, personally.

So we had been thinking about future evolutions and the exploitation of planets for some time and at some point it started to remind us of this particular story of Ballard, which has some interesting parallels with our concept although in a completely different setting. The story provided a nice narrative framework for our piece as well as giving us another point from which to reflect on the themes, but it is not a retelling of the Ballard story.

MW: Yes. It was a clear idea that in the future the traditional separation between organic and synthetic, between life and artificial, will blur out entirely. This development is being depicted in the video, evolving from a world seen through a human observer’s eyes to something incomprehensible.

LB: Yes, it was an integral idea from the start that the structure of the performance should mirror this evolution, starting from a more recognisably human state to something post-human, beyond. And that this should be told through not only the visual element but crucially through the structure of the musical score. We wanted to bring together two musicians whose work we knew would embody these two ideas and inform the piece beyond our own expectations. They are both great musicians with very different creative approaches and it was an honour to have that added input.

SN: What was your starting point to develop the visual aesthetics for Dream Cargoes? And how did you create the images?

LB: For the initial post-human landscape it was important to show a landscape depleted of minerals, water and organic material. I found the images from the Curiosity Mars Rover inspiring here, as they seem to offer a glimpse into the future of our planet and are not at all as alien as one would imagine.

With the support of Werkleitz we travelled to Iceland and shot all the cinematic footage on location in the volcanic landscape there. Which has this perfect mix of beauty, loneliness and a sense of quiet hostility. The increasingly abstracted imagery, the synthetic life forms and depiction of evolution was developed based on research into current nano- and biotechnologies and lots of experimentation with generative imaging techniques, applying this idea of untamed evolution to the medium with which we were working.

SN: Marcel and Lucy, the two of you conceived the project. How did Roly and Keith came in?

MW: Roly, known for his massive cinematic compositions, seemed the natural choice to describe the bleak, exploited planet in musical terms. His interest in working with a string quartet informed this first part of the piece even further, as we imagined the string players caught up in the musical transition from Roly to Keith.
Keith’s work with intricate synthesizer patches on the other hand was just the perfect expression of the future evolutions. The complexity of his setups, the infinite possibilities in the circuitry and the oscillating energies set free are like artificial life forms of their own and probably the closest one can get to an incomprehensible sonic Eden far beyond mankind.
We have been lucky to find both of them interested in the project and willing to work with us!

SN: The piece not only visually but also musically consists of two parts. Was this envisaged from the beginning or was it a result of your different musical practises? Does this also relate to the opposition of the organic and synthetic mentioned above? Also Keith’s part is more or less improvised while your part, Roly, is a scored composition. These contrasting approaches also made me think of the notions of chaos and order …

Roly Porter: Yes, this is a deliberate part of interpreting the brief. The differences in style and performance between Keith and me were chosen specifically to represent the distinct chapters of the narrative. The piece begins with a scored composition played by myself alongside a string quartet. The music is very slow, sparse, with simple drawn out ideas. This was designed to complement the scale of the opening chapters. Wide open landscapes and a sense of melancholy, of loneliness as though experienced from a single perspective. Keith’s music is the perfect antithesis to this. A frenetic, improvised set of pure electronics, Keith’s music matches the change in the narrative as new forms of evolution violently explode into being.

SN: Roly, on your album Aftertime you have already dealt with the notion of the post-human and sci-fi, on your recent one Life Cycle of a Massive Star you refer to the non-human and the mortality of all things. What interests you in questions like these?

RP: Most of my solo work seems to focus on these topics. It is not supposed to influence how people listen to it, I would like everyone to interpret the music for themselves. It is more the way I relate to my own music, or the things I like to consider while writing music. All music, including ones own, can be an escape from the present. Many science fiction ideas have a sense of scale and time that is often missing from daily life. I like how fragile and impermanent we seem when viewed on this scale and for me, listening to music and writing music enhances these thoughts.

SN: Another concept often connected to utopias is the collective. What do you think about collective artistic creation?
Apart from this project, all of you have been part of duos or working with various other artists and musicians. What is appealing about collaborations?

RP: Writing electronic music can be quite an isolated experience. I spend a lot of time working on my own and most of that time is on a limited number of machines or software. I love collaborating, and not just with other musicians. The Dream Cargoes project was an amazing opportunity for this. I had worked with Lucy and Marcel before and always loved their work. Watching them prepare the video was fascinating and the results were beautiful. Working with Keith is great but I suffer from terrible tech envy! I want his machines. I spend far too much time using music software and Keith’s modular setup is the perfect opposite to that. It’s completely hands on, instant. A really exciting and inspiring way to work. And finally the string quartet. They are excellent players and it is a great pleasure having something you have written been brought to life by real people, to escape the bounds of the electronic environment it was created in.

You could think that a collaboration would prevent the realisation of one persons artistic goal, with multiple conflicting ideas. But as someone who is used to working alone I find the energy and challenge of combining those ideas is almost always beneficial.