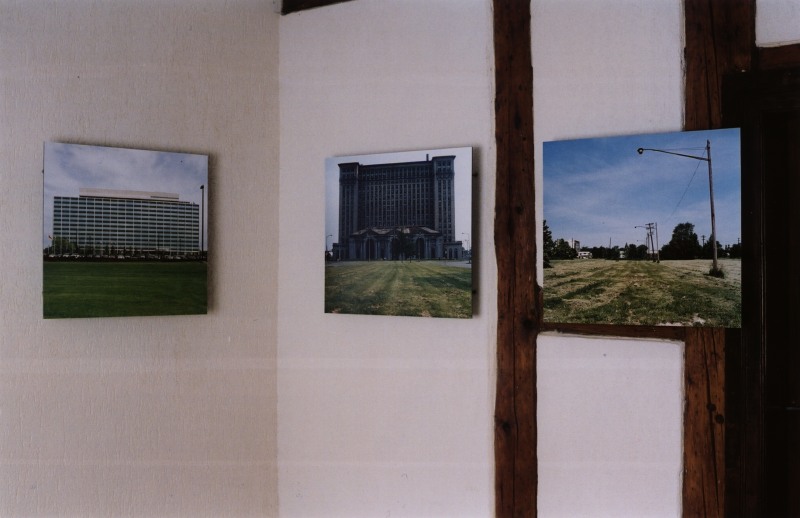 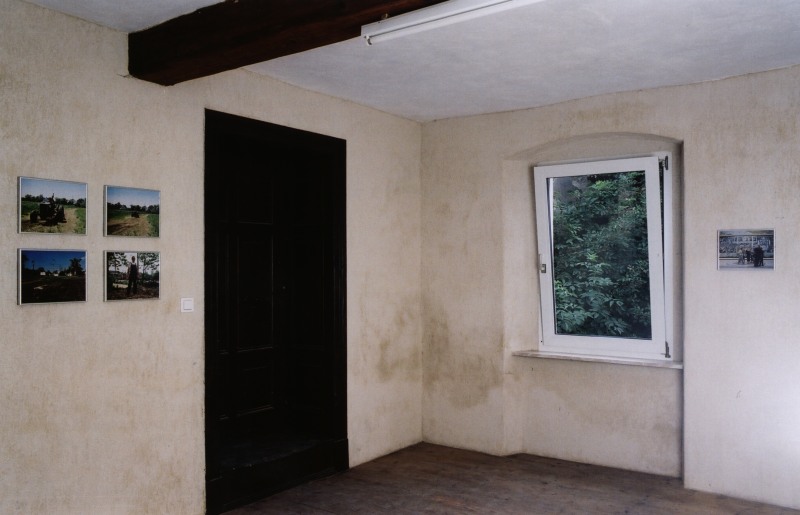 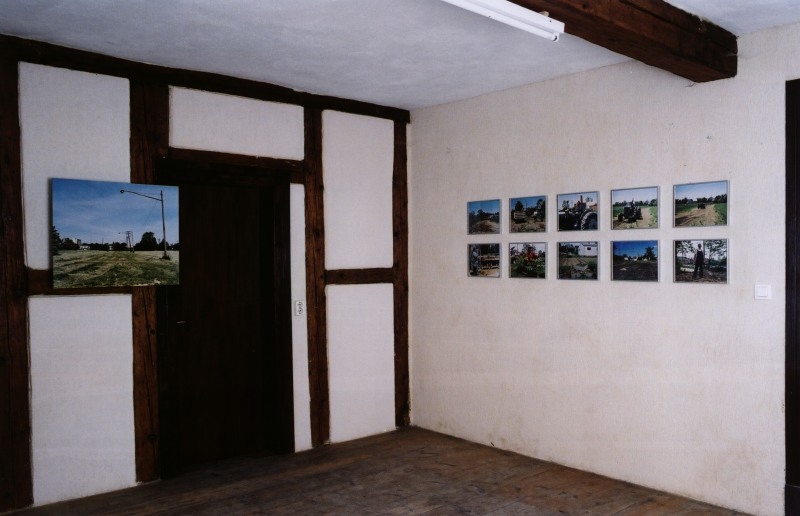 The fallow, partly “renaturalised” industrial wastelands in Detroit’s inner city, a former center of industrial production, drastically demonstrate the results of today’s automatisation and relocation of production sites, just as in Saxony-Anhalt, - even though national and historical backgrounds differ. The juxtaposition of the situation there with the current reality in the new federal states opens up a level of comparison beyond clichéed economical and political systems. For the Werkleitz Biennale, Annette Weisser and Ingo Vetter have realised a long thought-of project. Their research and targeted encounters of the two artists con|centrate on Detroit’s inner city and the various local initiatives of an alternative culture. In two rooms, directly to the left of Nana Petzet’s do-it-yourself presentation, they exhibited large-scale photographs of buildings and wasteland in downtown Detroit, hung in front of the half-timbered facade of the Heimatverein (Local Culture Association): pictures of Ford’s World headquarters, the abandoned former main train station and one of many industrial wastelands in the inner city. A number of smaller photographs documents the activities of the “Detroit Agriculture Network”, an informal group of about 200 smallscale farmers in the city of Detroit. On the wall between the two windows, allowing a view to the Heimatverein’s yard, Nana Petzet’s tent, the book-stall and the restaurant’s outdoor area, another, smaller, photograph was to be seen: It depicted Diego Riveira’s mural, commis-sioned in 1932 by Edsel Ford for the Detroit Institute of Art,- a large-scaled hommage to factory labour.

The installation touches on aspects of comparison between two post-industrial landscapes and widens the scope of the discussion of the topic ‘work’, to transcend regional situations and history. Segments of a video-interview with Lee Burns, one of the founders of the “Detroit Agriculture Network” were to be seen in Nana Petzet’s tent in the building’s yard.

In Detroit, Fordism has been experimenting with living human beings,- but now, these humans are experimenting right back! They compost car batteries and detoxify the soil by growing alfalfa. When we heard of agriculture in the inner city of Detroit, we envisioned some kind of spectacular scenarios, of corn fields surrounded by ramshackle factory halls, providing barest survival to locals living in impoverished neighbourhoods abandoned by government agencies. Who and particularly why anybody would want to cultivate the land in the middle of Detroit seemed a much more interesting question than the fact that it is actually being done, because if there’s anything that is available in abundance in Detroit it is fallow land. That wasn’t always so: During the Detroit’s heyday as the automotive center of America, between the twenties and sixties, extensive housing projects for the “Big Three”(Ford, Chrysler and General Motors) were constructed inbetween the factories. The depopulation began in the beginning of 1967, when the pent-up rage of Afro-American Detroit residents over an openly racist police-force exploded in several-weeks-long street-fights. This started off an exodus of the white middle-class population to the suburbs. A slump of the American automotive market due to the first energy-crisis resulted in the loss of thou-sands of jobs, and when the market finally recuperated during the eighties, the company mangemants had realised, how much smoother than in Detroit production in the union-free Southern States could be. For several years, many of the abandoned buildings were burnt down on “Devil’s Night,- the eve of Halloween, a spectacle which drew many pyromaniacs from all over the country in addition to neighbouhood kids. The remaining buildings were demolished, extensive meadows were created.

Often there is a piece of cultivated land in the middle of such a fallow lot, hidden away from the streets: under the pretext of possibly disrupted traffic or of fugitive suspects hiding out in the greenery, the alfalfa fields are regularly destroyed by the police. They mainly want to keep these small farmers from establishing themselves in the inner city, thereby disrupting the administration’s concept for urban development. The administration’s aim is to up-grade these ghetto-ised quarters mainly by drawing back (white) capital, inviting it to move back in from the suburbs. The dilapidation of abandoned buildings, drug-trafficking and prostitution are consciously tolerated in areas, for which a concrete development plan exists. This lowers the prices for land in these so-called empowerment-zones and drives out the last remaining residents; those unwilling to leave are resettled by force. If no buyers materialise within a certain time, the lots move into the posession of the town. And the city can then offer to potential investors large, connected lots at dumping prices. The sqatters as well as the farmers aquiring land disrupt the city’s cynical speculation strategy.

In Detroit, an empty lot costs between $500 and $3000. Many of those who have remained in the city, have bought additional land or have enlarged their private gardens onto abandoned neighbouring lots. About 150 of these small farmers are organised in the “Detroit Agriculture Network”. They sell their products on a “Farmer’s Market”, taking place on Saturdays in the eastern part of town. The motto of the D. A. N. - “Growing People and Communities”- already hints at the fact that the production of cheap and healthy food is not the only point on their agenda. The main interest of the farmers is the improvement of the social network in the immediate environment. Particularly children and youths are to be provided with a chance to develop self-confidence and improve social competence by participating in school- and neighbourhood gardens, in order to develop perspectives beyond the drearyness of their every-day lives.