▶
Filmprogramm Death Can Dance I 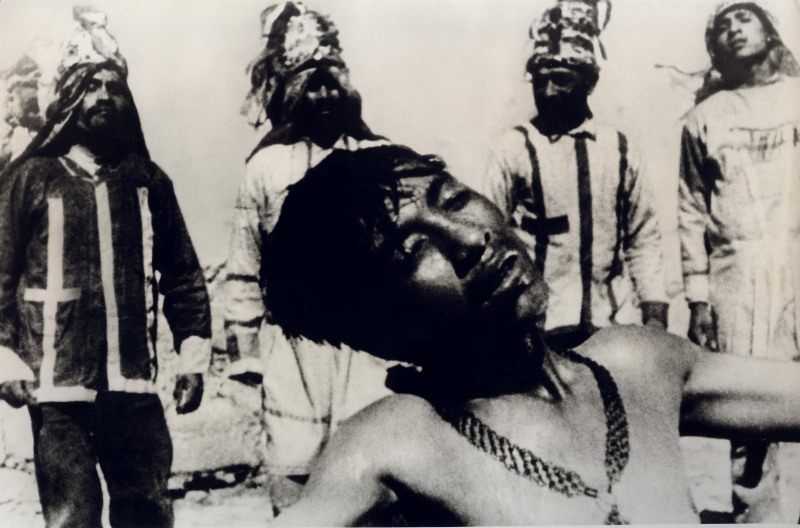 It is said ‘In Mexico they laugh about Death’. Death Can Dance 1 presents as starting point the classic film Que Viva Mexico by Russian filmmaker Sergei Eisenstein filmed in 1931-32 and finally produced by his friend and co-director Grigori Alexandrov in 1979. Interesting in the context of Death Can Dance is the modern depiction of the subordination to the idea of death in Mexican culture. The prologue reflects the historical pyramids and the ‘pagan’ Mexican funeral rites. The part Fiesta encounters the carnevalesque annual remembrance of the Colonialisation of Mexico by the Spaniards, who literally built Catholic churches on top of the Mexican pyramids in the 16th century. The fascinating and significant epilogue contrasts the traumatic colonial history with the annual celebration of ‘The Day of the Dead’, November 1th and 2nd a festive carnival of Death, in memory of the ancestors. Here Fiesta rites are held on cemeteries, sculls and coffins made of candy are given as presents to friends, and devils, cruel Spaniards, skeletons, Madonnas and ancient deities dance, reminding us that there is a scull under each hat.

The Soviet filmmaker, film theorist and writer Sergei Eisenstein (1898 - 1948), is e. g. known for his film Oktiabr (October, 1928) about the Russian revolution in 1917. Eisenstein was deeply committed to Marxism and where as early works were influenced by the agenda of Communist Party, later ones were at times subject to censure as e. g. Que Viva Mexico!. Eisenstein is known for his short and intense narratives and Agitprop style film montage.