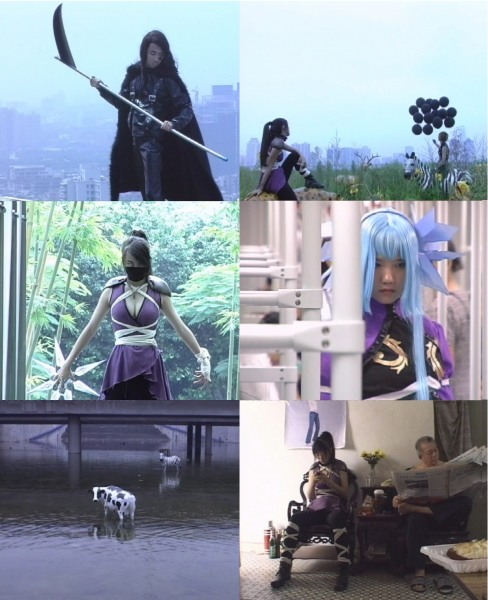 Cao Fei’s film work plays with a plot from a surreal world. Young people transform into heroes of a (computer) game universe. They dress up in the characters’ costumes, becoming elves, princesses, and knights. They believe that the costume and make-up lend them magical powers, allowing them to surpass reality’s limits. As heroes of a fairy-tale world, the young people enter the actual public world, on the street of a Chinese major city, to use their magical powers for a struggle in an imaginary world.
Outfitted with their dream identity, they flee into the parallel worlds of the game, where plagued souls devise their own rules: the world can be divided into ‘good’ and ‘evil’, and it’s all the easier to stand courageous and decisive on one side. The escapism to the imagination protects from insult, injury and misunderstanding, providing a sense of security and comfort ? even if only for the duration of a game.

Cao Fei is a film and video artist. Central in her works are the issues of ‘speed urbanism’ in China and the social and economic processes of transformation in both city and country, for example in Da Zha Lan Project.
www. caofei.com