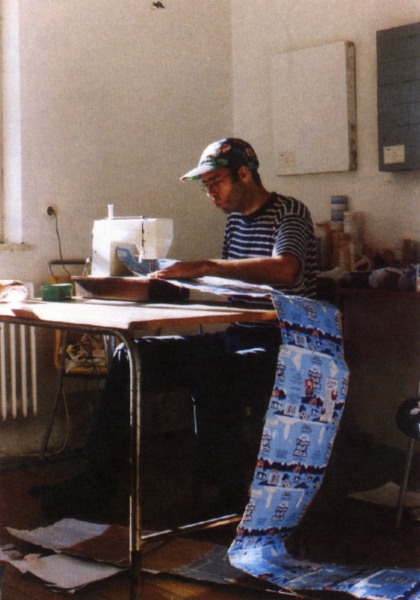 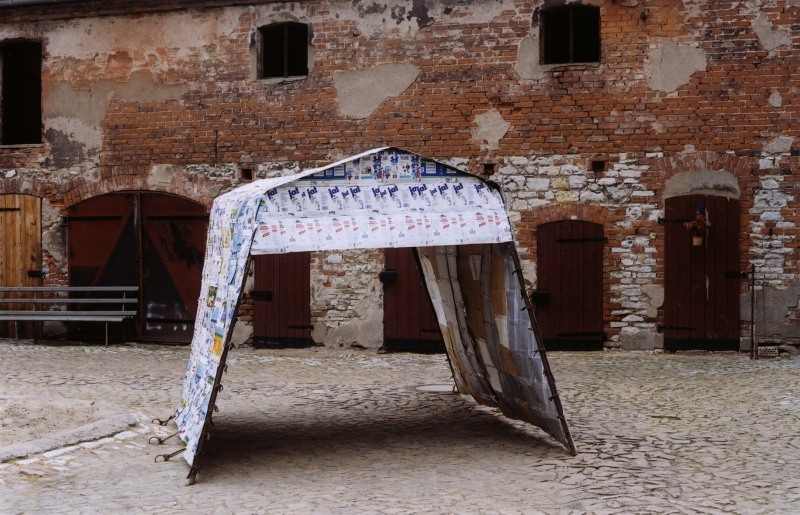 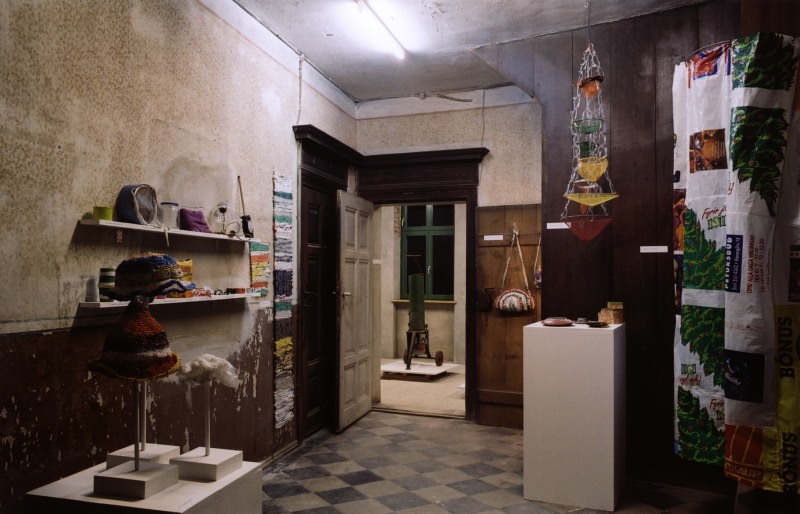 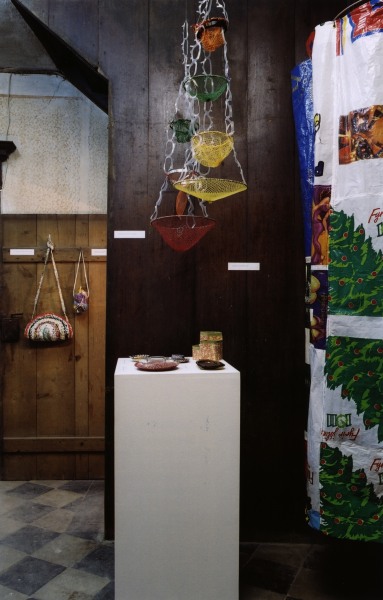 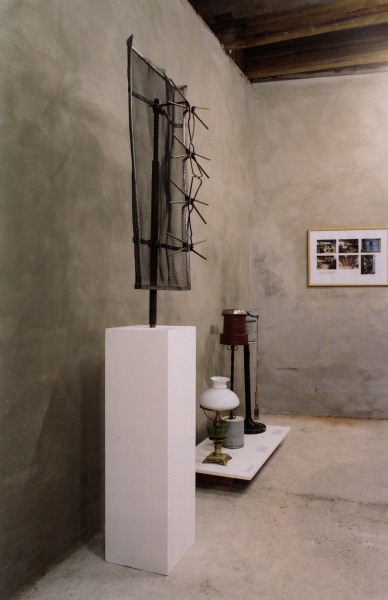 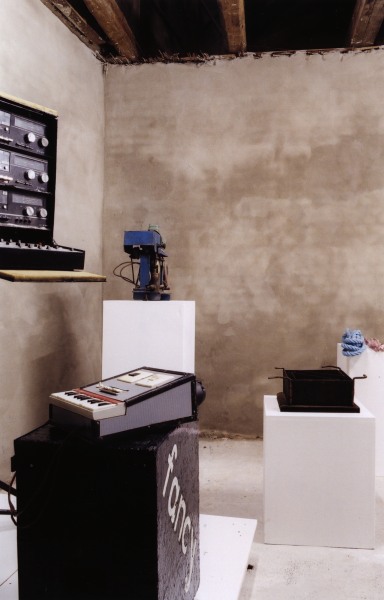 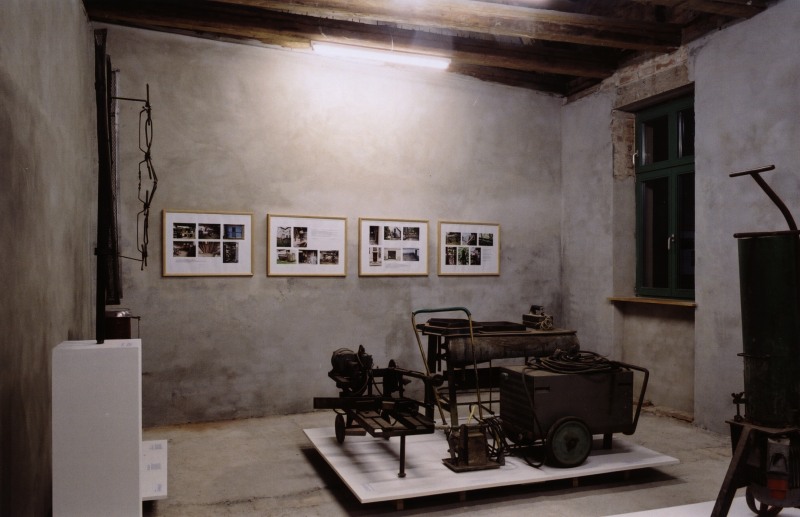 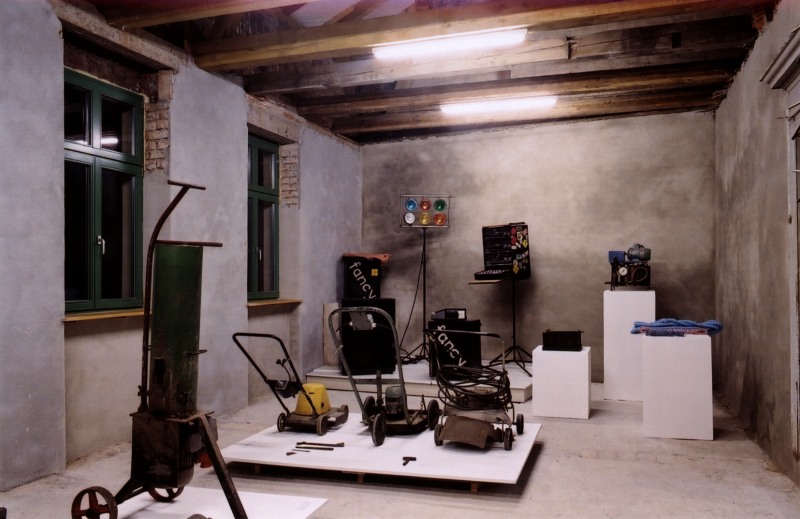 What exactly is work, and where, for example, does it happen? And what are its dealings with resources? In the freshly renovated mansion of the “HEIMATVEREIN” the local museum, under the title “ABFALLVERMEIDUNGSSYSTEM” (waste avoidance strategy), a variety of products are exhibited in three sections: a choice of self-built machines and homemade household-gadgets dating before and after the “Wende” (1989), a store of reusable material - screw-top jars and packaging materials-, gathe- red with the help of local supporters and a selection of objects belonging to Petzet’s own collection and in part produced by her. The objects are presented on pedestals, reminiscent of a museal mise-en-scéne. In the entrance area, Petzet’s own products are exhibited: hats and paper bins - made from plastic bags and ribbons, a showercurtain made from plastic shopping bags, as well as drain-sieves made from the bottoms of beverage cans. In a small room, slightly hidden, but accessible, the store of material is arranged on previously existing shelves. The largest room is given to the presentation of the home-made gadgets, curated in cooperation with local residents: a home-made welded wheelbarrow, a fixture for pouring concrete for producing flagstones, a television antenna, a large stereo for parties with amplifier, mixing desk and colour organ. In addittion to these self-built machines and household-gadgets, there is a whole collection of ingeniously repaired machines, such as an entire group of lawn-mowers with pram-wheels, as well as ashtrays created from a host of articles, such as tincans, candle holders and paint brushes. The installation is accompanied by a detailed cataloguing of the single objects, their function, time of creation, method of building, as well as an additional photo-documentation, showing the workshops in which some of the objects were built, a variety of possible uses of the concrete elements and a glasshouse with a self-built climate controlling system.

This exhibition of gadgets and machines, created by inventive local residents mainly before, but in a few cases also after the “Wende”, raised a few questions when juxtaposed with today’s situation: to which degree were inventiveness, resourcefulness and improvisation motivated by a lack of material and readily available standard-solutions - and to which degree at the same time an account of alternatives and a relative degree of autonomy was created? Where is the history of the GDR recorded after 1989, and which story will be told? How have do-it-yourself- solutions and resourcefulness in recycling changed in significance before and after?

The installation, which is sectioned into three parts, “Collecting”, “Maintaining” and “Researching”, exhibited the encounter between Nana Petzet’s own work and the local history and practice. Since 1995, Nana Petzet has been developing her own recycling model, “Collecting, Maintaining, Researching”, using the garbage generated in her own household. Her own prouction is less concerned with the functionality of the objects produced, but with the absurdity of an ever-increasing amount of packaging material and the necessitated recycling strategies. Under the motto “We make the promises of the Griine Punkt come true” (The “Grüne Punkt’or “Green Dot’ is the German recycling model, under which companies pay a fee to have a green dot affixed to their products and to have their packaging material recycled) she collects one-way packaging material and transforms it into, sometimes decorative, objects for daily use. Milk cartons were cleaned and unfolded and are turned into necessaires, paravents and doormats. During the following years, the exchange of ideas and the communication with others, which was. always part of exhibiting her products, has increased in importance.

Outside the building, on the cobblestoned yard, a tent, fabricated from a do-it-yourself welded frame and tent-pegs made from drainage pipe fixtures. The (awning) outer layer consists of sewn-together milk cartons. It adds a colourful accent to the surroundings and acts as additional exhibition space. Inside the tent, Annette Weisser’s/Ingo Vetter’s Interview with Lee Burns, one of the initiators and a long-standing member of the Detroit Agriculture Networks, was shown.