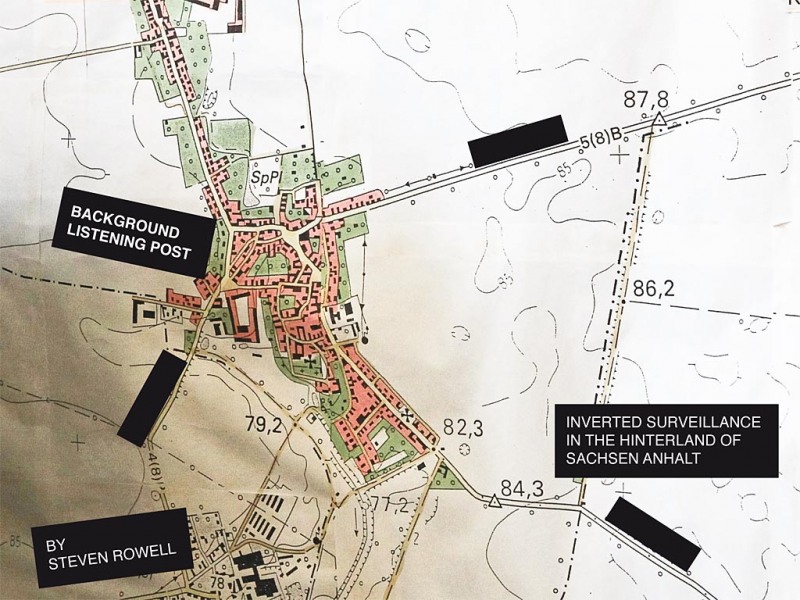 Steven Rowell will reactivate a former phone bugging facility that was operated by the Ministry of State Security (Stasi) as a switchboard and control centre for bugging operations in the surrounding countryside. The former telephone switchboard at the end of the village in a small community served to make live recordings of telephone conversations that were held in the surrounding villages outside of the GDR. The facility is still in exactly the same condition as it was when it was abandoned in 1990. On July 17 2010 Steven Rowell will give an introduction to the area and will offer excursions to similar facilities in the surrounding countryside. In September Steven Rowell will present the results of Background Listening in the former facility in the form of an audio station and will publish a guidebook that enables visitors to independently browse through the results of his research.

Steve’s work operates to excavate hidden landscape of infrastructure, militarism and technology; to make visible domains of built and natural environments that are all too easily occluded or overlooked. Steve blends techniques of cartography, geography and field observation to bring neglected or usually inaccessible sonic and visual landscapes into startling perspective. Two projects together provide an excellent introduction to the range of Steve’s influential work.

The Background Listening Post, the project commissioned for Angst in Form, part of the Werkleitz Festival 2010, meanwhile seeks to probe into the ways in which contradictory landscapes emerging since reunification in rural East Germany are represented, understood. Once complete, the project will allow people to guide themselves around the backspaces of former DDR industrial and idyll landscapes. Itineraries will dwell on the ruins of Stasi surveillance networks as well as the post-industrial re-use of brownfields. Extreme landscape juxtapositions will be emphasised: western themed pubs (saloons) adjacent to soviet aerospace memorials; former Nazi/soviet airfields refitted as a field of solar panels, bio-gas plants, and wind turbines; a fake western town (“Tombstone Western Stadt”); a former Stasi contingency command center and labyrinthine bunker complex disguised as an orchard. Focusing on a disused telephone switching station in the small village of Görzig, this project stems from the abandoned equipment within, conceptually and acoustically tracing a phantom, covert infrastructure outward, back into the fringe landscapes of Sachsen-Anhalt, the hinterland of Germany. An audio installation, the Background Listening Post, at this site, will allow visitors the chance to listen to field recordings collected from select locations. This serves to invert this history of surveillance, revealing the ambient (natural and man-made) sounds of the landscape, as opposed to the closed-circuit monitoring of telephone conversations of local residents during the time of the former DDR.

Steve’s Sonic Boom Archive encases listeners within a constructed installation allowing them to experience the intense but often-inaccessible acoustic side effects of supersonic US Air Force fighter jets – sonic booms – the loudest sounds humans can create short of nuclear detonation. The project works across intangibles and voids, limits and thresholds, these sounds are monitored, recorded, and transmitted back into the airspace above and out onto the surrounding landscape. The 18-month sound archive makes tangible the restricted and precisely demarcated aerial realm of hyperactive research and development, training and testing, manifested as tactile percussion upon a desert terrain scattered with mobile homes and struggling towns – the overlooked, over flown, and heavily militarized vast deserts of the American Southwest.