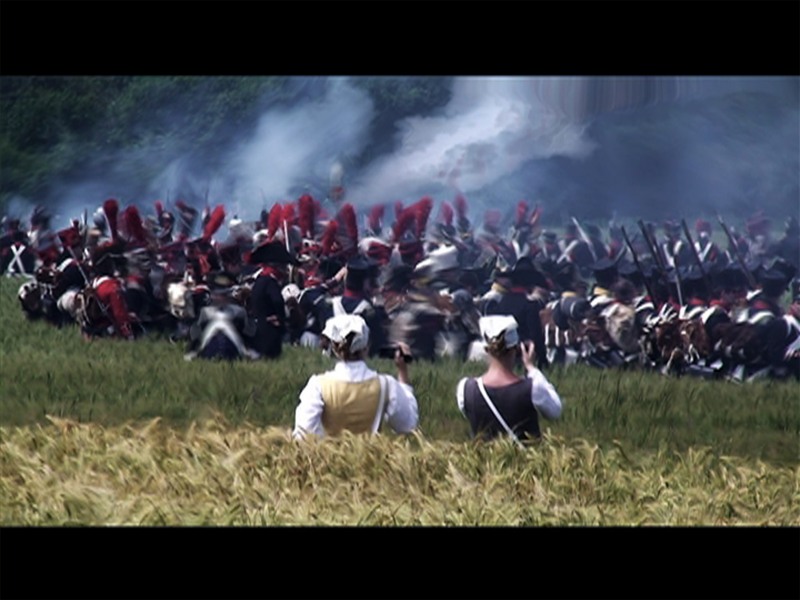 Archaic History With a Smile

The opening sequence before the credits for Kurt D’Haeseleer’s Archaic Smile is a strong, decisive first chapter. From a dense, seemingly breathing or heart-pumping blur in a broad swathe of green and red­ – covered by a vein-like structure – images emerge of a group of contemporary people waiting in a late nineteenth century hall that may be a factory or a train station. They are waiting to depart. The next shot – played in reverse –shows other people, closer to the camera, who move backwards to join the crowd again. The soundtrack swells, as if to announce that something big is about to happen. Then the title appears in reverse, which suggests that it was set up, not for the real-life viewer, but to be read by the audience, the crowd in the film. It seems that they need to be informed about whatever it is they are waiting for. These are therefore, the true spectators, waiting to be allowed to enter the scene. As the film unfolds, we find ourselves watching other people watching a representation of history.

The film evolves, showing vague images of soldiers battling; explosions and smoke appear through the biomorphic layer of video graphics. The next episodes also show images of spectators in the stands of an amphitheatre, watching a show. Images of knights on horses, the eighteenth century military and Roman soldiers pass by, and these different epochs blend together in an impressionistic video mix. Sometimes a layer is predominant in the foreground, like a dense cloud, allowing you to grasp only impressions of movements and armour. The firing of a gun and its heavy smoke create spectacular video graphics, which foregrounds the video medium itself. In other fragments the layer disappears completely and we have a clear view of what is meant to be a historic sight: as in the closing scene, for instance, where we have an uninterrupted view of the impressive tower of a medieval castle. But then the tower starts to move, and it is as if you are watching a digital intervention in reality. This assures you the viewer and the spectator in the film that all you have been watching, is an image that is possibly fake.

What is a historic image? Kurt D’Haeseleer explores this question by focusing here on the phenomenon reenactments. These are happenings in which people dress up in historic costumes and meet to re-enact historic battles. These events date back to antiquity, when armies fought fake battles to entertain the ruling classes. In the nineteenth century, especially in the United States, amateurs started to execute such reenactments, re-fighting the War of Independence every year as an act of commemoration. In recent decades reenactments of such diverse subject matter as the Roman Empire and the Second World War have grown enormously popular, and the phenomenon has spread across Europe. ‘Reenactors’try to recreate as accurately as possible notable moments from the past. It is like a magical undertaking, an attempt to travel back in time to relive bygone events. It is a desire to experience history as an adventure, and to create a parallel universe that seems far away from the actual time and place in which the participants live. Along came the historic theme park, where people can stroll around in a park filled with newly built historical houses, and staff walking around in costumes to match. These parks and reenactments function in contemporary society as ‘live representations’, as a supplement to the more familiar representations on film and television.

What is interesting in D’Haeseleer’s portrayal of the reenactments is its focus on the double standard of such representation, of live versus cinematic representation. He focuses on the cracks in representations. Every sense of magic disappears when a modern house is visible from behind, a Roman soldier holds a microphone in his hand, or when a figure dressed up as a maid supporting an army takes a photo camera out of her pocket and starts photographing the scene of which she is also part. Cameras appear throughout the whole film. Spectators and participants alike seem all to believe strongly in capturing this staged, fake reality by photographic or cinematic means. This is the moment when the film Archaic Smile is no longer part of the cinematic tradition of masking and faking, and harsh documentary reality steps in. The subject changes from history to people dealing with imagery of the past. This mirrors our desire to comprehend history, by transferring it to imagery we are able to understand, by cinematic means that we are able to control.

Archaic Smile confronts us with the question, as to what a contemporary representation of history is based on. Is its definition changing? Are history books being replaced by Hollywood, which has more or less gained a monopoly on visualizing history? These reenactments are live representations of historic episodes. By filming them, D’Haeseleer places them back in the cinematic tradition. The soundtrack of Archaic Smile uses and remixes a theme from a dramatic film score, appealing to our memories of historical dramas we have seen already. We are used to watching people dressed in historical costumes, presenting an interpretation of the past, in which fact and fiction coexist, framed by a soundtrack.

But on a deeper level you could say that the film deals with human understanding of the image itself. You could even say that human understanding and experience of images are presented quite literally. The viewer is tempted to compare the video’s graphic layer with a human membrane. The images look like a microbiological image, as if you are watching the human brain itself, in extreme close up: or, more specifically, the spot where visibility is activated, the place where we experience the outer world thanks to complex synaptic processes. The constant movement of this vein-like layer suggests the rhythm of a living substance. The soundtrack also suggests this reference to a membrane, for the broken pace of the rippling beats creates a living continuum. This is the deepest possible close-up of an image.

Besides the video graphics’ literal reference there is a more powerful remark to make regarding how they are used. Kurt D’Haeseleer is well known for his extreme video manipulations. He created several works in which the footage is treated to heavy graphic intervention. This style is widely appreciated in the art world and beyond. He has collaborated with artists from theatre, dance and music, and has created sets for live cinema and VJ-ing. He has a highly personal style, and uses graphic effects that are not available in standard video editing or processing software. They are, in a way, ‘hand-made’. In this regard, his approach reflects his inquiry into the authenticity of an image.

His manipulations deconstruct one basic aspect of the digital video image. They allow him to combine and exchange pixels from different frames. D’Haeseleer manipulates images by forcing them to react to the parameters of other images. With this approach, he can only partly foresee how the image will appear. ‘It is like developing analogue photographs, where it is always a surprise to see the result’, he explains. By relying on this process-based strategy, he is able to incorporate chance and keep the imagery ‘alive’.

But this also means that information from different moments in recorded time interchange on a microscopic level. Such treatment of video recordings undermines our reception of time and thereby our reception of history, as we are used to perceiving it through the cinematic medium. What we are watching is the process of watching an image of history itself, from dazzling perspectives. Reenactments function metaphorically as the human inability to really represent an image of the past. D’Haeseleer presents this without judgment, but with an archaic smile.