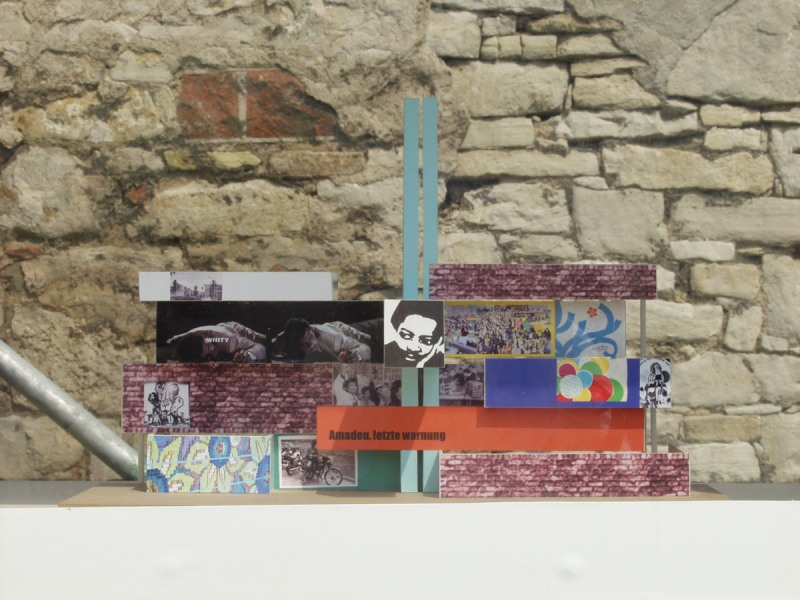 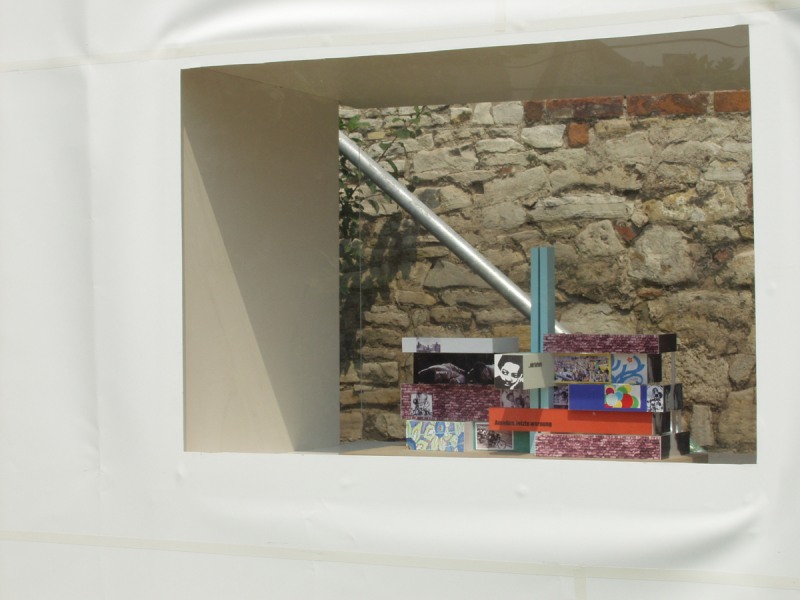 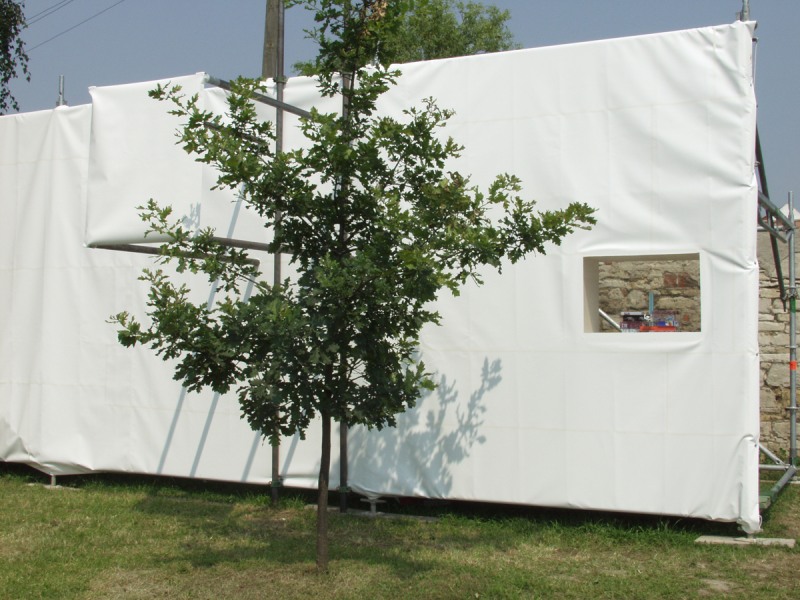 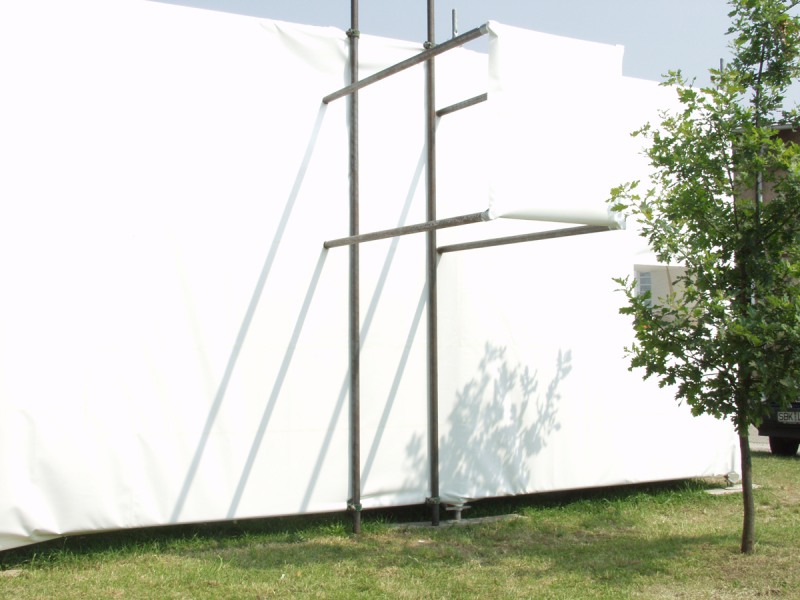 “Amadeu. last warning” is in remembrance of Amadeu Antonio, the first victim of a racist mob after the fall of the wall. Moreover, it alludes to the hit single by the Afro-German music project “Brothers Keepers”, whose song “Adriano (Letzte Warnung)” commemorates Alberto Adriano’s murder in Dessau – “why we are sending out our love to Amadeu and Adriano” Sèkou (Brothers Keepers).

“Amadeu Antonio was an Angolan worker in a small town in Brandenburg who was beaten to  death in 1990 by rightist youths because his skin was black. He was the first victim of racist violence after reunification. He never got to know his son, Amadeu Antonio Jr.” (Amadeu Antonio Foundation).

In the single release of “Adriano (Letzte Warnung)”, Xavier Naidoo sings the refrain that can at first be interpreted as strangely defensive: “Dies ist so was wie eine letzte Warnung / Denn unser Rückschlag ist längst in Planung / Wir fall’n dort ein, wo ihr auffallt / Gebieten eurer braunen Scheiße endlich Aufhalt / Denn was ihr sucht, ist das Ende / Und was wir reichen, sind geballte Fäuste und keine Hände / Euer Niedergang für immer / Und was wir hören werden, ist euer Weinen und euer Gewimmer” (literal translation: “This is something like a last warning / Because our retaliation is well planned / We will intrude where you stand out / We’ll finally stop your brown shit / Because what you is a clenched fist and not a hand / Your fall once and for all / And what we will hear is your crying and whimpering”).

Whity lies on the ground, colossal, like Gulliver, bound by the colonial chains of slavery. “Title. White text on a still: Whity, head to the ground.” After the opening credits are projected on his body, the body rises up. With a red rose in his hand, he might be able to break his chains. Günther Kaufmann as Whity is neither white nor black. Make-up has turned the Afro-German actor into a white-face. His position in society depends on the disposition of the gaze.

In a book accompanying Rainer Werner Fassbinder’s screenplays from around 1970 – seven cinema and TV films were produced during this time – it becomes clear that the collective production work Fassbinder had hoped for had failed, with Whity at the latest. “He constantly urged everyone to take initiative, to contribute their creativity. He didn’t want to always be the driving force of the group. But the speed with which he used to appropriate the new medium [film] was too great for most of his co-workers: they couldn’t keep up with him. He felt himself being pressed into the role of the exploiter who was “simultaneously exploited.” (Michael Tötenberg in: Fassbinders Filme 2). The film Warnung vor einer heiligen Nutte (Beware of a Holy Whore) – produced directly after Whity – narrates the end of the collective.

“Dear friends or comrades or whatever … why don’t we regard the work on the film [Warnung vor einer heiligen Nutte] and the time in which it’s done as a last possibility to examine why things went the way they did and not differently, and what changes would be necessary to maybe still create production conditions that could make a further cooperation something worth striving for after all.” (Fassbinder in a letter at the start of shooting on 9/14/1970).

Whity was a flop not only with critics but also economically – the copy could not be released and the film therefore never made it to the cinema screens. It took twenty years before Whity showed up again “in the program of a commercial TV station”. The DVD copy is distributed by KirchMedia GmbH & Co. KgaA. On the occasion of the 20th year of Fassbinder’s death, a manuscript of a film on Rosa Luxemburg, over which the director died with his nose bleeding, on June 10, 1982, was shown on TV.

In remembrance of the murdered communist Luxemburg, the German architect Mies van der Rohe built the “Memorial for Revolution Victims” in 1926. The wall, which was made out of clinker from destroyed buildings, was to be reminiscent of an execution wall and was ceremoniously displayed to the public on Luxemburg’s birthday in the Berlin-Friedrichsfelde cemetery. Mies van der Rohe’s only sculptural work was commissioned by the collector and art historian, Eduard Fuch, who in 1926 was the first secretary of the Communist Party. A steel star with hammer and sickle was set up next to a flagpole. It had to be assembled on site, as the Krupp steel works refused to manufacture the ensemble as a whole. The inscription “ICH WAR ICH BIN ICH WERDE SEIN / Den Toten Helden Der Revolution (I WAS I AM I SHALL BE / To The Dead Heroes Of The Revolution)” was never realized.

In 1933, the National Socialist regime had the Berlin Spartacus monument razed to the ground. In 1934, Mies, commissioned by the National Socialists, participated in an internal competition for the German Pavilion at the World Fair in Brussels. He sketched a swastika with pencil on the wall and a flag. In 1938 Mies van der Rohe emmigrated to the United States. The grave, during GDR times called the “Memorial for Socialists”, is today still the destination of tens of thousands every year on the second Sunday in January.

In the middle of a field near Rudolstadt, stood a modernist-looking ensemble of cubes fitted into each other to provide advertising for the 10th Party Convention. This simply assembled display is now pushed into Mies van der Rohe’s “Memorial for Revolution Victims” in remem- brance of the murdered Rosa Luxemburg and Karl Liebknecht. “AMADEU. LAST WARNING” is in memory of the victims of barbarism.