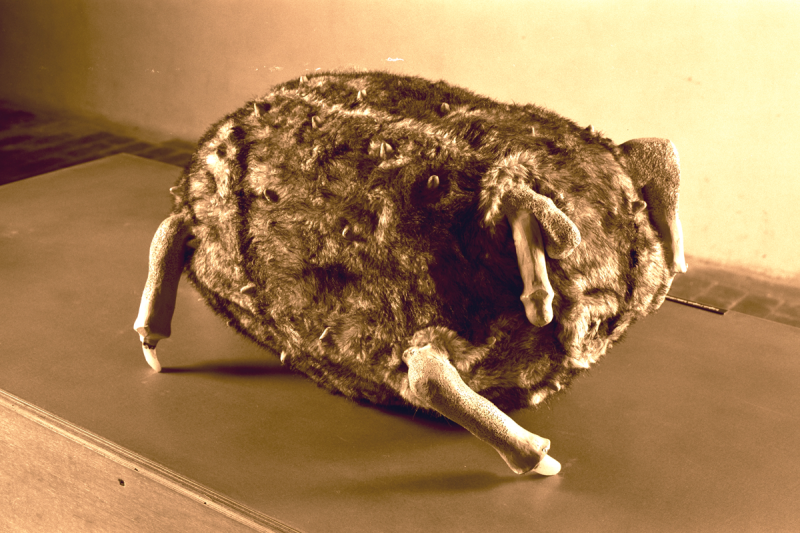 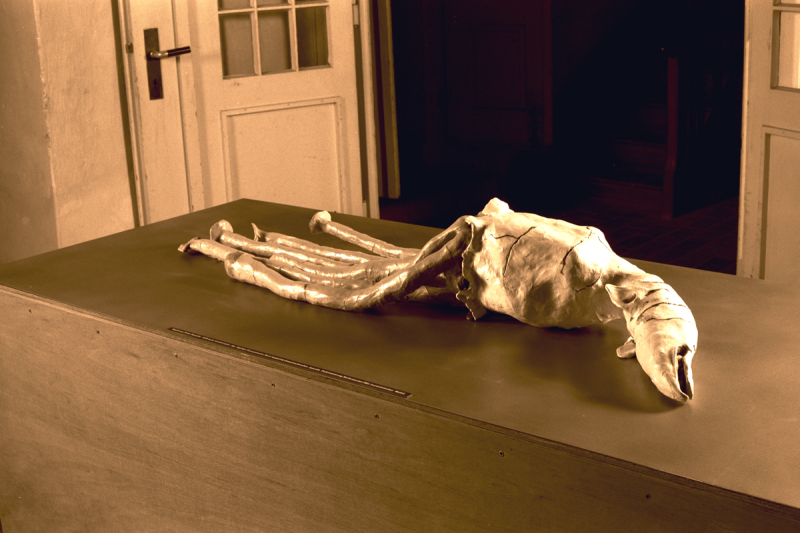 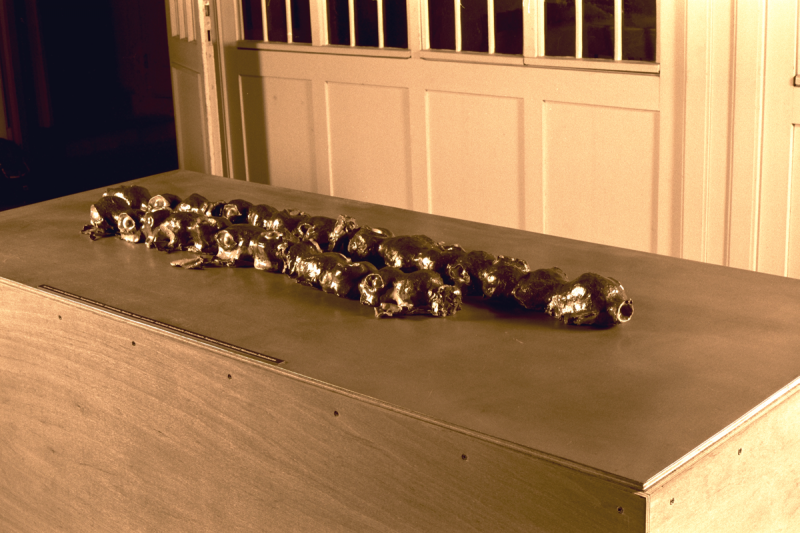 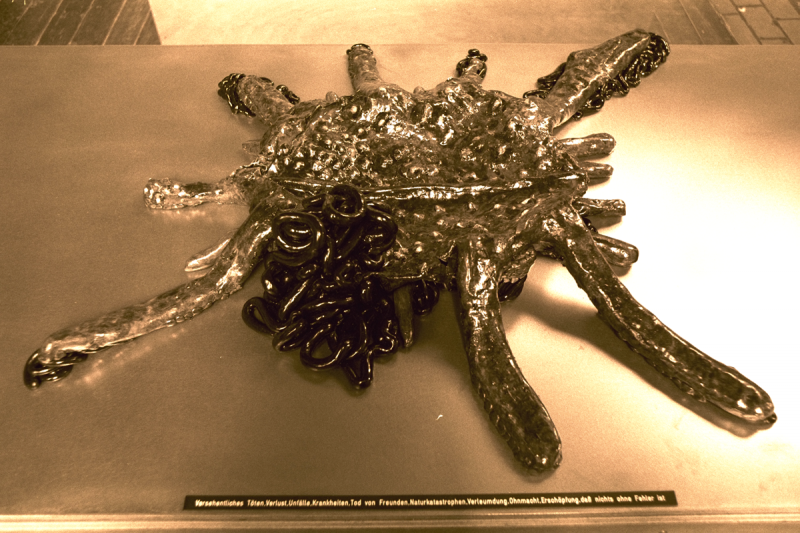 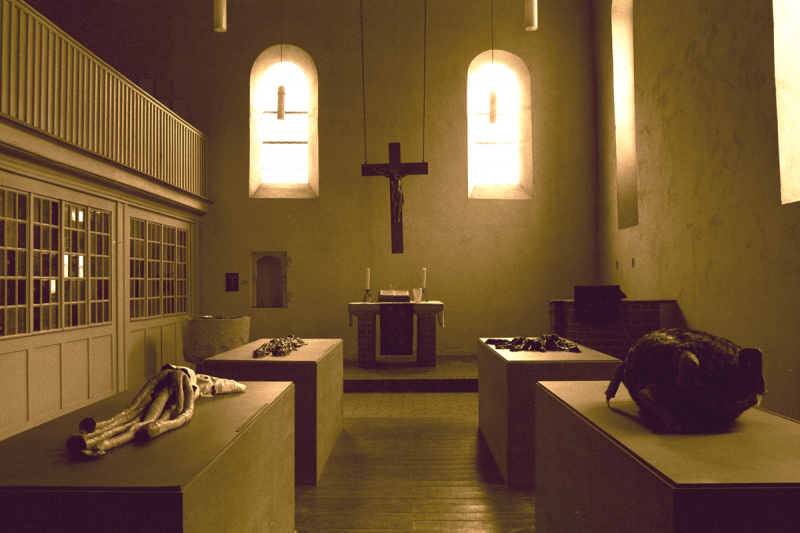 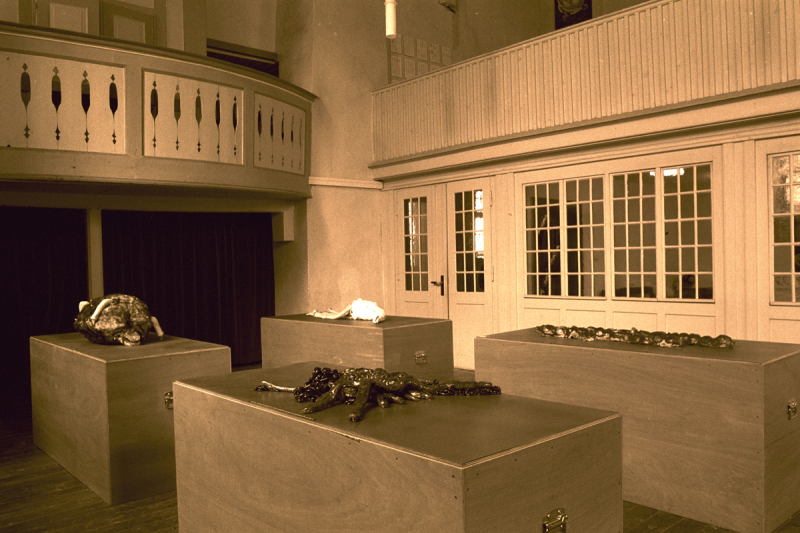 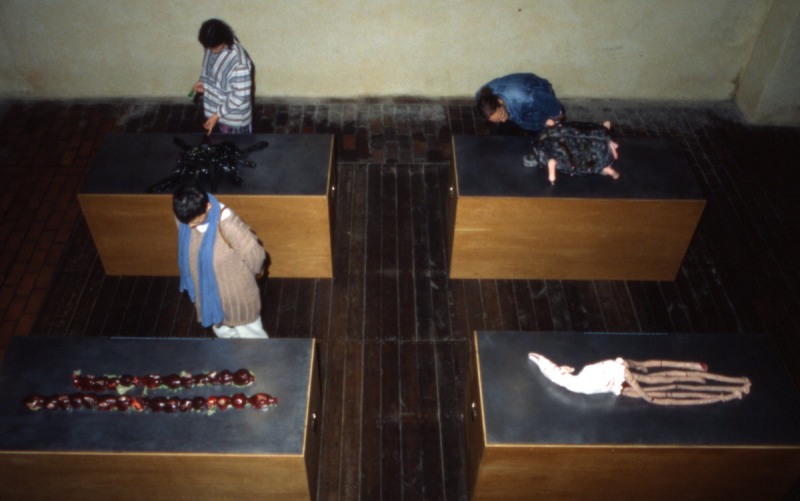 Carmen Mörsch announces on a note attached to the church door that „the 4 whose fault everything is” have finally been captured and beaten to death and now everything is all right again. As proof of this victory the corpses of the monsters who were responsible for all the world’s evils are laid out (or staked out) on four large, coffin-like chests in the nave of the church. These creatures, formed from plastic, plaster, textiles and latex, still bear the evidence of the way they died (they have stab wounds, have been shot, torn to pieces or squashed flat). On the one hand, they cause horror and pity, but on the other hand they remind us of cute toys or distantly even of comic figures and are somehow amusing. Their character is anyway thoroughly hybrid. One of them seems to be a cross between a squid and a rat, another is half male and half female, and a third could, at first glance, be either a squashed toad or a simply a pile of industrial waste. Each of the four monsters is a visualisation of a certain group of evils, and together they are the personification of absolute wickedness – with reference, in a way, to the four elements of life. Since the evils are named on plastic signs attached to the trunks these vivid objects function symbolically, to a certain extent, as voodoo dolls, while, as actual monsters they are real scapegoats. And as a secondary effect, this also emphasises the difference between a painted version and a carved version of Christ on the Cross, for example.

As preparation for this project, the artist invited friends and colleagues to a private think tank in Berlin where they drew up a list of evils (ranging from major evils such as „racism” to annoyance with „dog dirt”). Using certain criteria they then divided these into four groups and finally discussed their visualisation in the form of sketches suggested by Carmen Mörsch. The artist followed up the collective impulse of this method as part of her presentation of the „monsters” to the 3rd Werkleitz Biennale. One week before the exhibition opened she held a four-day workshop on the theme of „good and evil” and the biblical story of the scapegoat with interested villagers and their children at Werkleitz Church. The participants have suggested that the resulting painted glass panes, which are also attempts at visualisation (i. e. projection), remain in the church on permanent display. Other pieces and remainders from the „scapegoat workshop” – such as the wordlists from the first brain storming session and drawings and sketches – can be viewed in a side room of Werkleitz Church during the Biennale.