After the Never Existing (Vision of a Utopian Slum Center) / Dead Adv (Visual Aid No. 4a) 2013 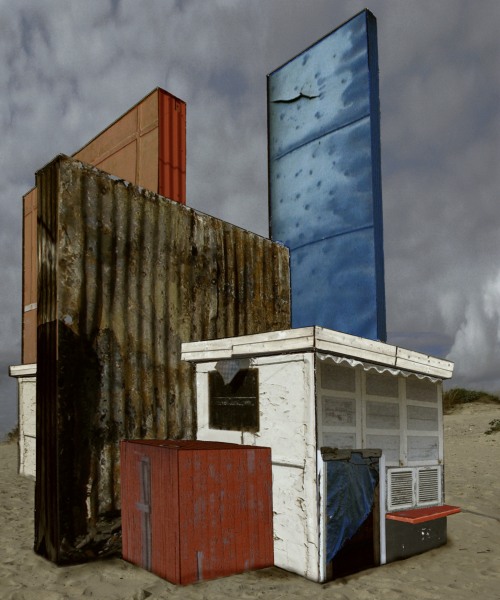 After the Never Existing (Vision of a Utopian Slum Center), 2013, © Tamás Kaszás 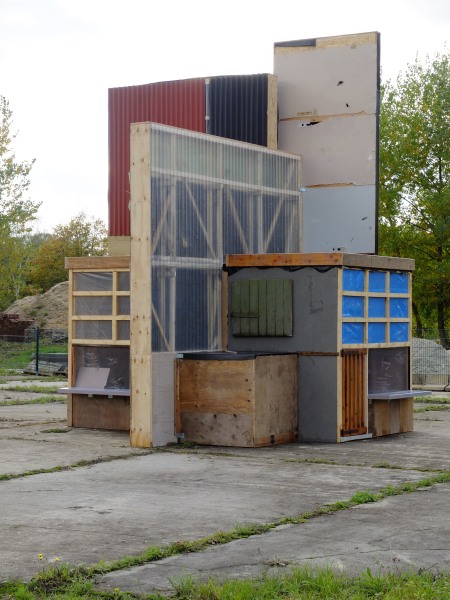 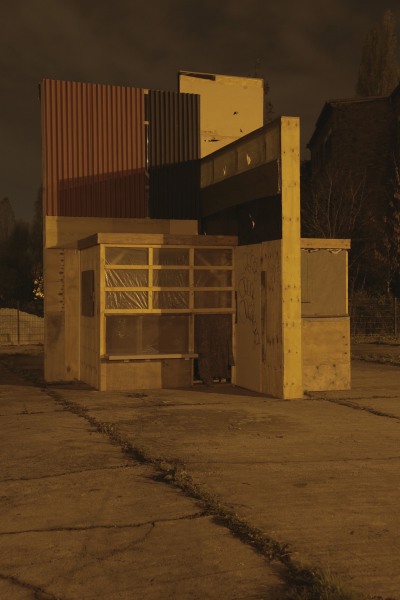 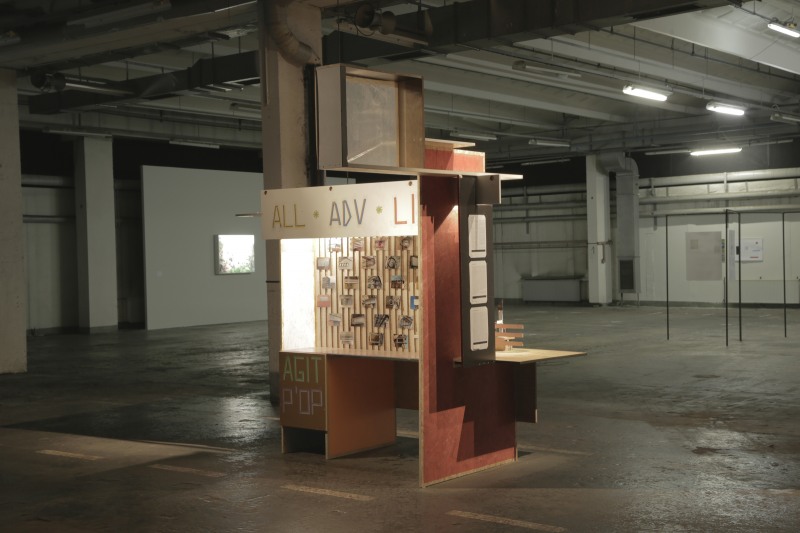 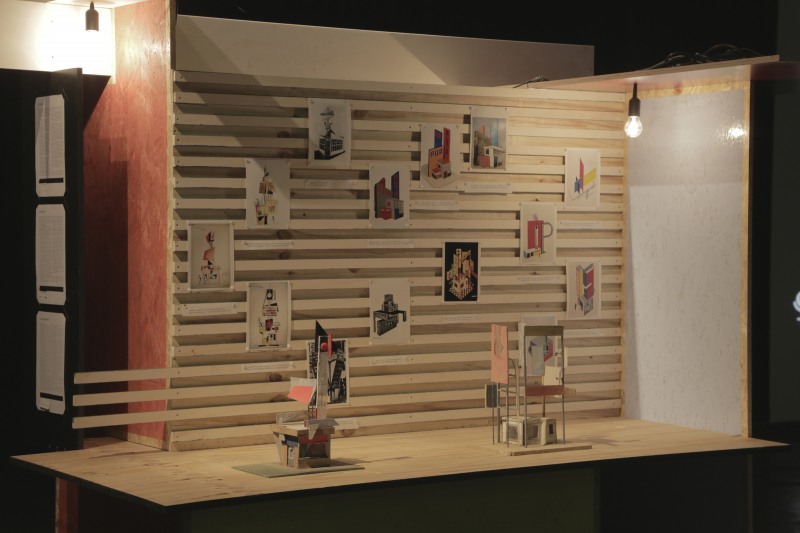 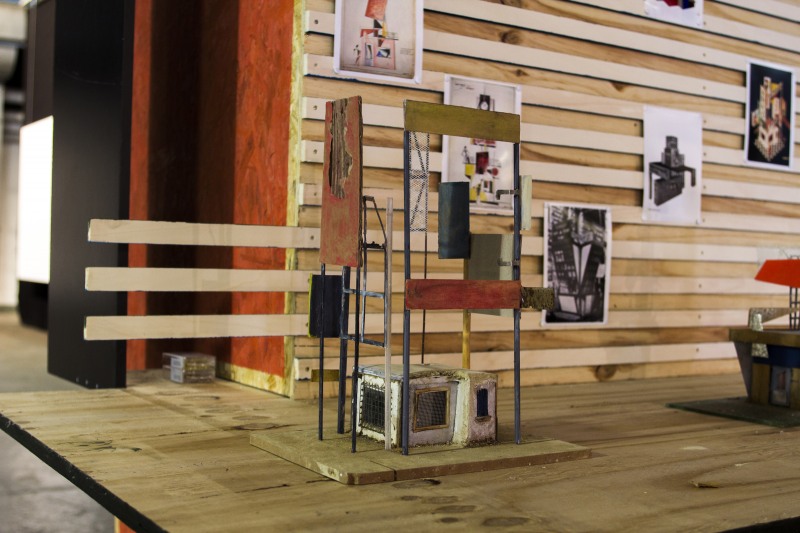 It was coincidence that both exhibitions took place at the same time at the same place, just a few of hundred metres apart: Utopien vermeiden (Avoiding Utopias), the Werkleitz Anniversary Festival exhibition in the Technikhalle in the Holzplatz area, and Gewissheit.Vision: Francke von heute aus gesehen (Certainty.Vision: Francke Today),1the thematic group exhibition programmed byMoritz Götze and Peter Langin the Historical Orphanage of the Francke Foundations at Halle. As though they were parallel universes that did not know about each other but still contained numerous details that could have referred to each other’s thematic focus: on the one hand utopia, on the other hand vision.

In the “visionary” exhibition in the Historical Orphanage you could hear the voice of the architect Philipp Oswalt, the director of the Bauhaus Dessau Foundation, speaking on a vinyl record of the “utopia of limiting global warming to two degrees Celsius” as an “important model for conservation” (that can as such, as a contemporary version of utopia, no longer be a “utopia of innovation”).2 Meanwhile, at the Holzmarkt, opposite the Technikhalle with its “utopian” alignment, stood, as a vision, a kiosk never made operable. An architecture built by the Hungarian artist Tamás Kaszás, titled After the Never Existing (Vision of a Utopian Slum Center). This kiosk vision and the idea of designating a restriction of global warming as a utopia have more in common than at first apparent.

In 1922, the Hungarian writer, artist, journalist and “activist” Lajos Kassák (1887–1967) painted a newspaper stand (Bildarchitektur II (Entwurf eines Kiosks)) [Image Architecture II (Design for a Kiosk)] with towering advertising boards in striking colours and angular letters most likely influenced by a kiosk design by the Russian constructivist Alexander Rodchenko from 1919.3 In retrospect, Kassák’s kiosk, which existed prior to the Werkleitz Festival only as a model reconstruction, stands together with the Austrian Bauhaus student and later teacher Herbert Bayer’s Entwurf für einen Zeitungskiosk [Design for a Newspaper Stand] from 19244 – presumably influenced in turn by Kassák’s gouache, both exemplifying the constructivist orientation within modernist art.5 Kassák’s design also testifies to his notion of an “Image Architecture” (to be established outside of architecture itself) as a “new synthetic art” as well as to his interest at the time in graphic advertising. His approach thus embodies an antinomy between commodity aesthetics and utopia; a combination of propaganda, advertisement and enlightenment not uncommon at the time. As he wrote in 1926, “Creating advertisements means being a social artist”.6

Tamás Kaszás built this kiosk for the Werkleitz Anniversary Festival as an outdoor piece following Kassák’s design, albeit – compared to current human dimensions – in a slightly shrunken version and without adhering to the stipulated colours. Kaszás, whose work frequently directs a post-utopian perspective at modernism, employed simple recycled material such as boards and slats, old doors and tarps. The advertising spaces had no more text and the store itself could not be entered. The kiosk resembled a ruin, or, seen from the interior, that could be entered if you stooped, a bivouac, an impression amplified by the mattress Kaszás had placed there. The mattress gave no indications of whether it had really been used and who had put it there.

If the building was originally a kiosk, what had happened to the goods to be sold in it? What about their exchange value? Had the commodity aesthetic been a failure or a modernist utopia or both? Or could we already see here a future effect of the Anthropocene? The look that gets marketed elsewhere as the “favela style” surfaced in Kaszás’ installation as the afterimage of a social order based on capitalism and modernism, progress and excess. A second piece by Kaszás in the Technikhalle referred to corresponding indications from the present moment. In addition to models and reproductions of kiosks similar to Kassák’s design, the installation Dead Adv (Visual Aid No. 4a) showed images of the kind of vacant advertising billboards frequently found in countries displaying symptoms of the crisis, or in which it is considered politically expedient (São Paulo).

Kaszás’ vision of a kiosk (moreover a downscaled one,7 but nevertheless theoretically inhabitable) combines with the idea of a global warming limit as a standstill utopia in the moment the island enters the scene as the geographic motif in traditional utopian narrative. Considering the scale of probable future geographical changes it may seem insufficient to infer a direct connection between climate change and the June 2013 floods in central Europe on the one hand and possible future slum development (in Halle and elsewhere) on the other. Yet, an event occurring simultaneously on two islands as the catalyser for Kaszás’ piece After the Never Existing (Vision of a Utopian Slum Center) coming about on a third island deserves attention here.

As the floods submerged Halle’s Peißnitzinsel in June 2013 and it soon became clear that the previous planning could be trashed, not only did Kaszás have to abandon the idea for his contribution (intended for the ruins of the pavilion designed by Manfred Sommer) to the festival on the Peißnitz. At the same time, he had to reconsider his own plans. The same water that flooded the Peißnitz also reached Kaszás’ house 700 km away on Szentendrei-sziget, Szentendre Island, an almost 40 km long island on the Danube north of Budapest. The thematic similarity and synchronicity of the two exhibitions in Halle, Utopien vermeiden and Gewissheit.Vision, could be more than coincidence, and so too the floods in the two distant places. To quote freely from Reinhart Koselleck: what is now told as connected events will be told in the future, if at all, as part of a structure.8

The emergence of a third island – the Saale Island on which the Holzplatz is located – and with it the emergence of an alternative idea for the festival contribution was greeted by Tamás Kaszás rather as a new challenge than as a loss. In Kaszás’ artistic work, the improvised play with space and time is part of the method. Vision, utopia, dystopia and collapse are recurrent themes, e.g. in Megashelter from 2011, in which Kaszás adapts the megastructure ideas from the 1960s to the needs of an economically, ecologically or politically collapsed world, installing the modular entities in a model as the bearer of huts, not unlike Slum Center.9 With such pieces, Kaszás interrogates from today’s perspective the kind of modernist avant-garde aesthetics we now usually encounter in the form of alienating, sterile objects in museum collections, asking whether they have a second chance after the collapse. This would take the form of what Kaszás calls a “folk science”, a deep, popular echo from a utopian time through which the fragments of memory from modernism function as modules.10In the end, emancipatory avant-garde ideals could und would have to be adopted by all.

For now, these pieces are also always about exposing the efficacy of non-state and non-commercial lifestyles in a possible future as the buried potential of the present. Lajos Kassák wrote in his manifest Bildarchitektur [Image Architecture] from 1922, “The image architecture belongs to the first documents that show people today embroiled in struggle yet regaining their sense of security, making objective their world view in colours and forms that will help them to their feet by way of primitive art.”11 Tamás Kaszás’ two pieces for the Werkleitz Anniversary Festival, After the Never Existing (Vision of a Utopian Slum Center) and Dead Adv (Visual Aid No. 4a), pose final questions with and also against Kassák’s text: Are they really final documents? What became of the sense of security? Is now the last chance?

2http://gewissheit-vision.de/oswalt.php.Oswalt also participated in the Werkleitz Festival symposium, where he reiterated this concept of a utopia aimed at conservation instead of change as is usually expected of utopias. He put this in the historical context of the classic avant-gardes. They operated merely as a “cultural repairs shop” in an aimless, forward-driving modernisation causing everything to fragment. The Bauhaus building in Dessau is an example, designed not to point forwards but rather placing in a new context what 19th century industrial architecture had already created. The utopian move consists accordingly in taking recourse to the past in a way perceived as projecting into the future.

Kassák was mainly a writer and was seeking to bring about effects of his own with constructivism. “What interested Kassák about constructivism was neither the Russian nor the Western paradigm. He saw in the approach a new art of salvation, the chance to build a future on a completely neutral basis. He put his interpretation of the concept into practice with the majestic gravity of a religious conviction. He thereby created a third, classicistic version of constructivism, which corresponded to the idea of a visionary new state and which both supported and attacked the arts.”Éva Forgács, „Du gibst uns zu essen und deswegen kämpfen wir gegen dich“. Konzepte von Kunst und Staat bei Lajos Kassák und in der ungarischen Avantgarde. In: Csilla E. Csorba (ed.), Lajos Kassák. Botschafter der Avantgarde 1915–1927. Budapest 2011, p.37 f. Transl. SB.

7 Kaszás’ work is in some ways reminiscent of Torsten Slamas’ Herbert-Bayer-Zigarettenkiosk/Atomskulptur from 2009 in the Cologne Sculpture Park, where Bayer’s kiosk design from 1924 was built for the first time on a smaller scale and modified by the addition of a gorilla guarding the cigarette projecting from the construction.

10 After the Never Existing (Vision of a Utopian Slum Center) would be accordingly read as signifying a ruin temporarily borrowed from a future of avoided utopias with projected deep time dimensions, as the title of the present text already intimates.