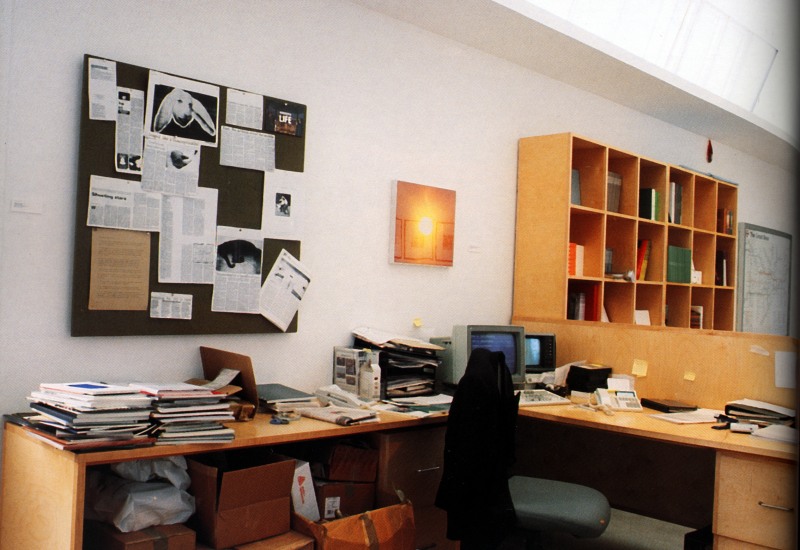 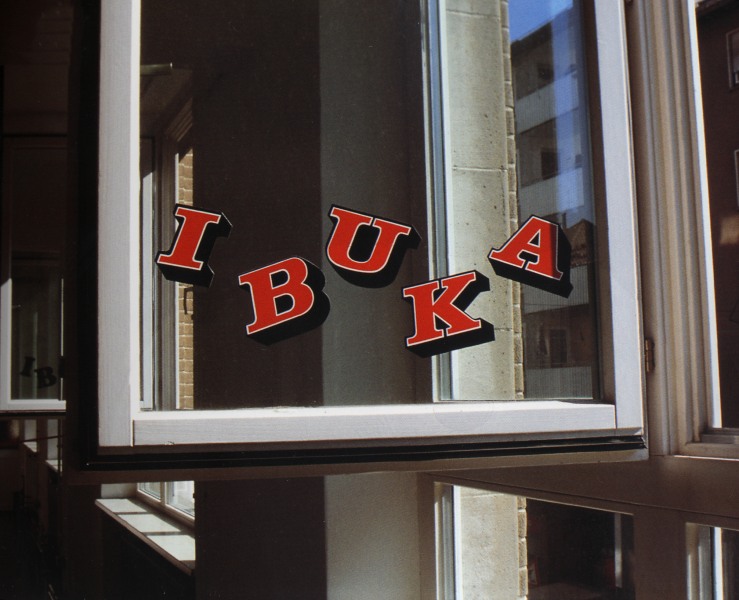 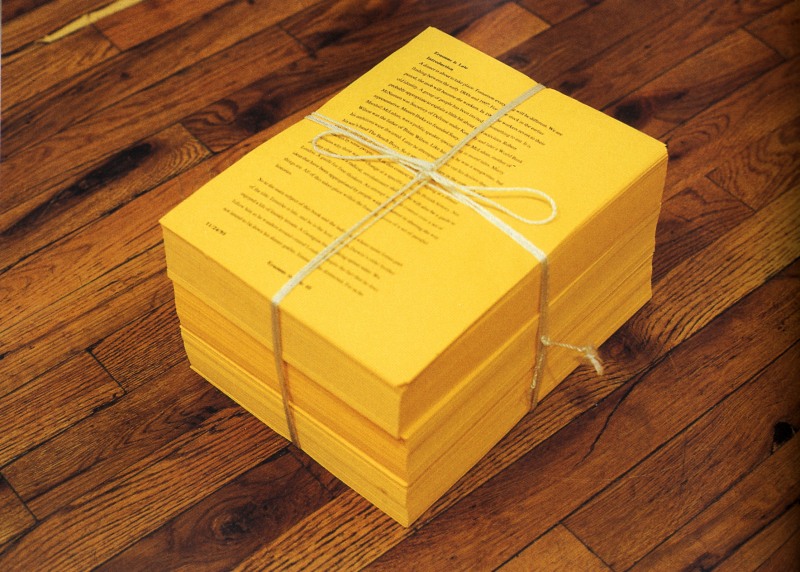 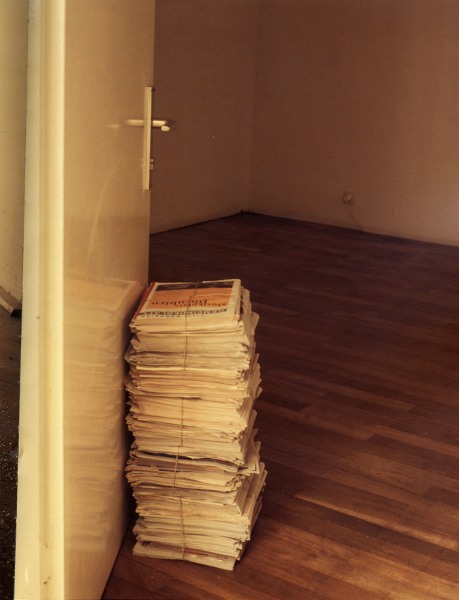 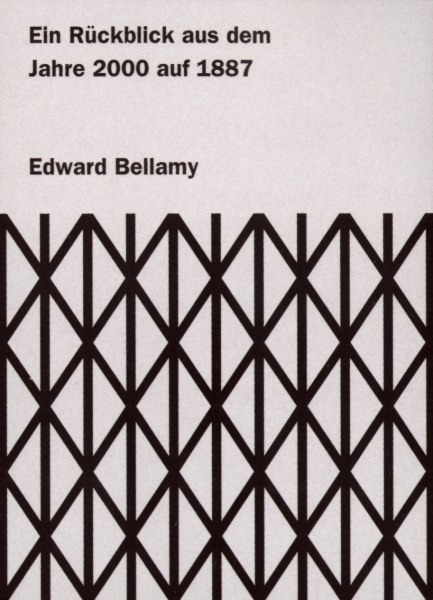 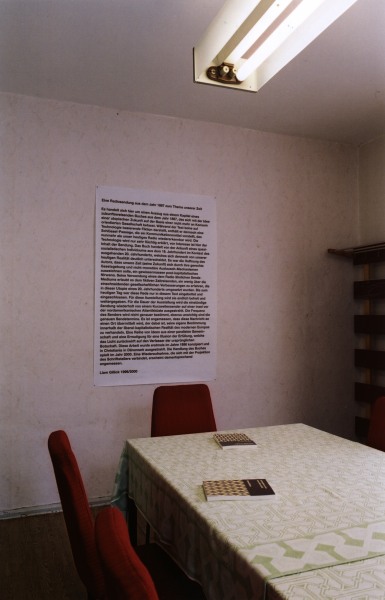 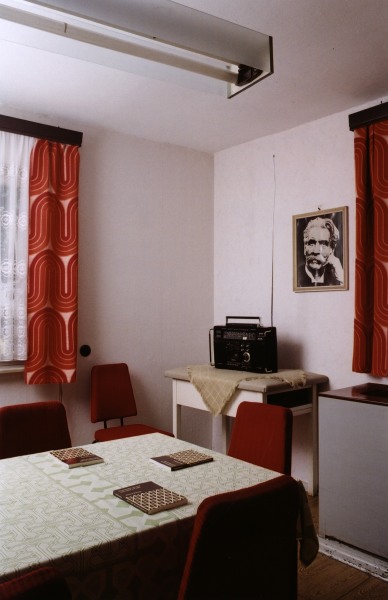 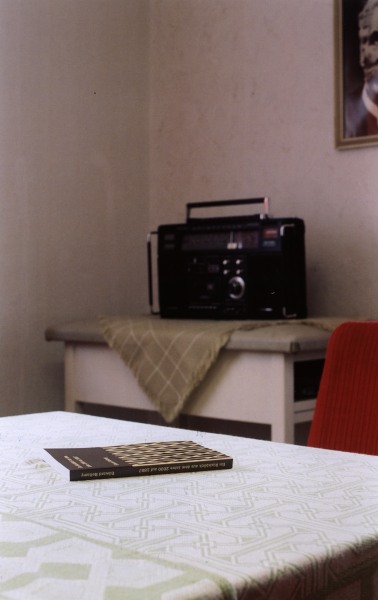 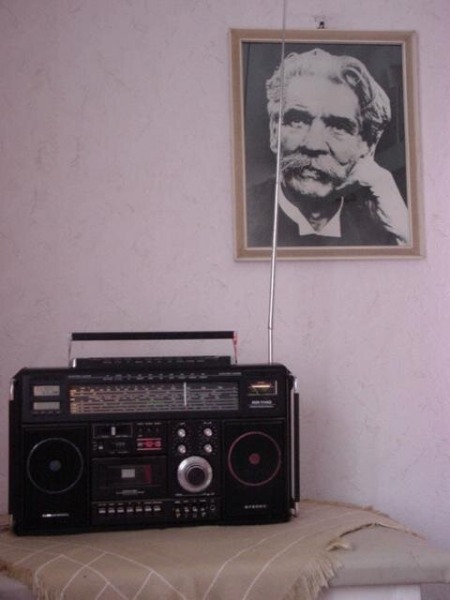 “What If?” For several years this has been a subtitle and a recurring motif in Liam Gillick’s work. Here, a poster, pinned to the wall in the waiting room of the local medical doctor, describes his project for Werkleitz: the potential airing of a radio broadcast from an improvised radio station on a little island off the east coast of the United States.

The broadcast comprises a sermon by a certain Mr. Barton, from Chapter 26 of the book “Looking Backwards: 2000 - 1887”, re-published by Gillick on the occasion of the exhibition for the Galerie fiir Zeitgendssiche Kunst in Leipzig in 1998 (“1+3 = 4x1”). The book was written by the American social utopian and proto-socialist Edward Bellamy. The chapter includes a vision of “radio broadcasting” before the invention of radio. In the book the sermon is disseminated via a tube system to all the homes who subscribe to it. This novel compared contemporary nineteenth century America to a vision of an ideal future in the year 2000. The novel’s protagonist, after drinking a sleeping potion, sleeps for 100 years and upon awakening finds he is now living in a utopian society.

The re-publication of the German translation confronts the present after the breakdown of the socialist models of society with a vision from the past. The ideal society from the year 2000, as described by Bellamy, down to the details such as the production and exchange of goods and the organisation of everyday life, cannot be found in our present, while some of his previsions, such as credit cards, covered walkways and subscriber information systems have affected the way our own situation developed.

It is ironic that the specific conditions that Bellamy describes in his account of the failures of the nineteenth century bear suprising simularities to our today’s social injustice and unfettered capitalism.

While Bellamy’s vision may have contributed to a context that led to the worst excesses of state control, his book can still be read as a plea for a more egalitarian and just society.

A broadcast from 1887 on the subject of our time

Taking part of a text from a predictive book written in 1887 that dealt with the idea of a utopian future centred on a post consumer society. While the text is not a technologically based fiction it does contain one key section that proposes a means of communication now clearly recognisable as radio. The technology is only described in a basic way while it is the content of the broadcast that is of interest. In the book we are dealing with the arrival of a Nineteenth Century quasi-socialist individual into a late twentieth century context quite different from our own. It was the hope of the author that our time (his future) would be notable for its equitable laws and post-financial exchange mechanisms therefore existing as a post-Capitalist nirvana. His use of the radiolike broadcast allows the fictional time traveller to understand a little of the massive changes for the better that have been achieved in this late Twentieth Century utopia. To this day the speech has remained locked in the text alone. For this exhibition the message will finally be relayed. For the duration of the exhibition the hour long broadcast will repeatedly be made from a short wave transmitter located on an Island just off the Atlantic coast of North America. The frequency of the radio transmitter remains unspecified and the specific times of the broadcast are not important. It is appropriate that the message is communicated towards a place that is negotiating its potential within the liberal-capitalist reality of modern Europe. A series of ideas from a parallel community. Encouraging an illusion of fulfilment that can reflect back upon the author of the original message. This work was originally conceived in 1996 and broadcast to the community of Christiania in Denmark, the book is set in the year 2000, so a reprise seems appropriate to coincide with the projection of the author.