A Banner for Werkleitz 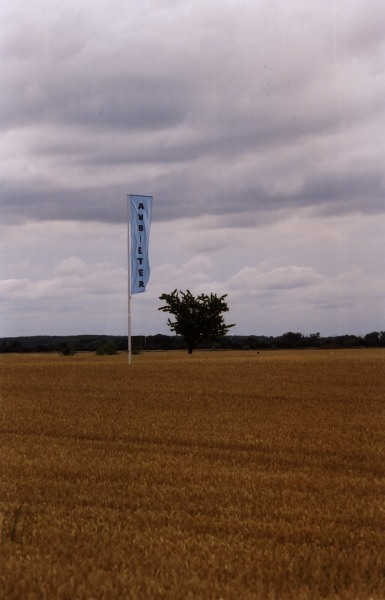 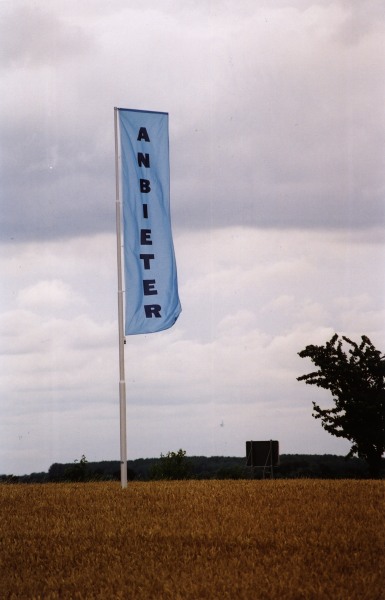 A Banner for Werkleitz, 2000, crossroads to Calbe/Barby, open field

The solitary light-blue ﬂag on an open ﬁeld just before you reach Tornitz was the first visual herald of the “real[work]” Festival. It was a visible landmark for anybody passing by on the nearby road. The ﬂagpost, typical for car-dealer-ships and DIY-markets, suggested a development planned for this site. The letters ‘Anbieter’ (Provider) recalled the symbolic colonialisation of the new federal states after the ‘Wende’. Public space had been virtually developed by billboard advertisement and marketing measures.

This ﬂag, on the other hand, represented an honest—to-goodness offer to ‘provide’ something: it advertised the Biennale, representative for non-profit cultural projects. here and at other locales, competing with a plethora of ‘providers’ and products.

Even before the reconstructions. the temporary detours and the renaming of the roads the flagpoles were erected. The ﬂag elegantly manifests the signiﬁcance of the developmental process. The many advertising banners of commercial enterprises are just as much proof of this as previously the Norwegian flag on the southpole and the American banner on the moon, or, as in the movie “Mission to Mars”, on the desert of another planet. The terrain is claimed, the developer present.

The “Banner For Werkleitz” upends this process. The lightness of its graphic appearance contradicts the weightyness it achieves as a menetekel of architectural brutality in the shape of car-dealerships, gas-stations and shopping malls. The development of the former LPG (agricultural production cooperatives) with their ideal properties as building sites for such consumer markets has led to a transformation of the landscape. The image of a landscape, inscribed with the structures of consumerism replacing structures of production. The “Banner for Werkleitz” totally assimilates this image and becomes a natural part, if not of the landscape, of its commercial superstructure.

It requires an active emotional and intellectual approach to isolate the ﬂag as an individual poetic signal from its environment. The lettering “provider” without any architectural base seems omnipresent and creates more disruption than the opening and closing door of a busy DIY-superstore.